Viveik Kalra stars as a British teenager in 1987 whose life is changed when he hears the tunes of Bruce Springsteen in "Blinded by the Light." USA TODAY

The genial British journalist has seen The Boss in concert more than 150 times since he was a teenager growing up in the working-class town of Luton, England, in the mid-1980s. He wrote about his extreme devotion, and his experience as a son of Pakistani immigrants, in the 2007 memoir "Greetings from Bury Park," which he has since adapted into joyous coming-of-age movie "Blinded by the Light" (in theaters Friday).

How did Manzoor, 48, afford that many shows? And was it tough to get Springsteen's blessing to use so many of his biggest hits in the film? We sat down with the author-turned-screenwriter to get some answers. 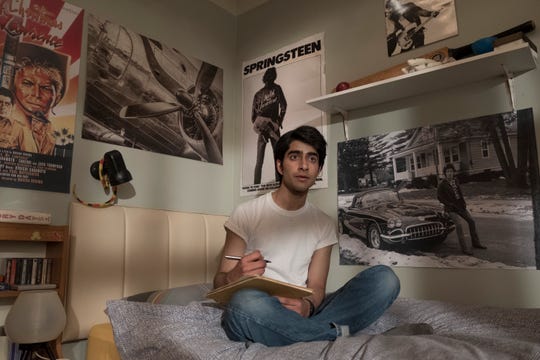 Like Sarfraz Manzoor growing up, Javed (Viveik Kalra) has a shrine to The Boss in his bedroom. (Photo: NICK WALL/WARNER BROS. VIA AP)

As a young fan, how did he pay for it?

Like his character in the movie, Javed (Viveik Kalra), Manzoor was introduced to Springsteen's music at age 16 when his friend gave him a "Born to Run" cassette and bought a ticket to his 1988 Tunnel of Love Express tour soon after. Moving back home and working in TV news after college, "I had a pretty good disposable income and I didn't have any relationships, so this is what I'd do instead of taking a holiday or buying fancy clothes," Manzoor says.

From 1992 to 2005, Manzoor says he went to every single Springsteen show in Britain, and would even travel around to Spain and France for concerts with his friends.

"We'd glimpse the Eiffel Tower and then spend all day standing outside the stadium waiting to see Bruce," he says. "It was our idea of fun and didn't seem like that much money because we weren't spending it on anything else."

Why so many concerts?

That camaraderie with other Boss fans is part of what has kept Manzoor coming back. "You're all together, so there's a sense of, 'These are my people,' " he says. Plus, "there's the simple thing that from 8 to 11 o'clock, you know you will have the best, most exuberant, jubilant, powerful, moving and profound time you've ever had. That is guaranteed, because he changes it up every night and he doesn't do a bad performance. (Knowing that), why would you not do it? So that's why I do it, because there's nothing that seems more fun than being in that room."

Manzoor's fandom is shared somewhat by his wife, a speech therapist, who tags along to some Springsteen shows but more or less "just loves the fact that I'm passionate," he says. He has managed to indoctrinate his 7-year-old daughter: "I sing Springsteen to her every night, that's my lullaby for her. She loves 'Glory Days,' and once sang all the lyrics to 'Dancing in the Dark' while bouncing on a trampoline at the age of 2, but called it 'Bouncing in the Dark.' So that was very cute. I thought I'd done a good job." 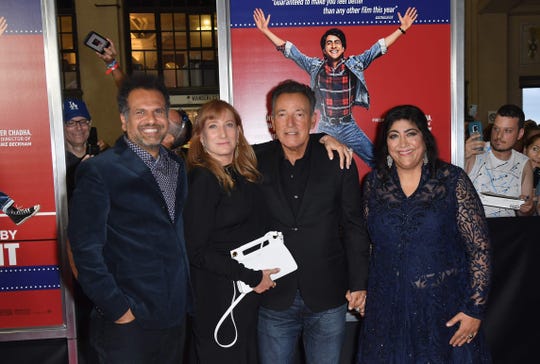 How did he meet The Boss?

Manzoor first met Springsteen in 1998, when the singer filed a lawsuit against a British record label over the unauthorized release of early recordings. Manzoor was covering the case in London as a journalist, "and so every time the court would be adjourned for 15 minutes, I'd be sitting next to Bruce and we'd chat about things," he says.

The Boss soon began to recognize Manzoor in the front row of his shows, and complimented him on his memoir when they spotted each other at a book event in 2010. After meeting director Gurinder Chadha years later and deciding to collaborate on a film adaptation, Manzoor wrote his idol what was essentially a 1,000-word fan latter asking for music rights.

Are they friends now?

Manzoor says he's not texting buddies with The Boss (yet), although he got to go backstage during his "Springsteen on Broadway" residency in New York last year. The singer has also endorsed "Blinded by the Light" since it debuted with glowing reviews (93% positive on Rotten Tomatoes) at Sundance Film Festival in January, even performing at the movie's premiere last week in his adopted hometown of Asbury Park, New Jersey.

"It's mind-blowing, this idea that somebody whose work has meant a lot to me now recognizes my work – not just as a fan, but somebody who has their own story," Manzoor says. "That's kind of a crazy place to get to."

In Bruce we trust: 'Blinded by the Light' immerses you in the healing power of The Boss

Surprise! Bruce Springsteen shows up at 'Blinded by the Light' New Jersey premiere