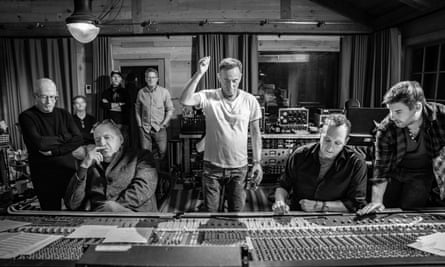 (Columbia)
An album about fallen comrades sees the E Street Band deliver the distilled elixir of their best stadium-filling form.

While Bruce Springsteen was performing Springsteen on Broadway, the stage iteration of his 2016 memoir, his former teenage bandmate, George Theiss, was dying of cancer. Well before the E Street Band, there were the Castiles, an incubator where Springsteen first played guitar, then sang, from 1965 to 1968.

As the end neared, Springsteen held a vigil at the North Carolina bedside of his former musical sparring partner. When Theiss died, Springsteen became the only surviving Castile, a realisation that spawned a new song, The Last Man Standing.

Thanks to a guitar unexpectedly given to him by “an Italian kid” at the theatre stage door, more songs began to pour out of Springsteen: songs about being in a band, about absent friends and snake oil salesmen. He told Roy Bittan, the E Street Band’s keys player, about the new tunes over lunch. Bittan advised Springsteen to leave the compositions as sketches, ushering in an album in which this storied band could build the songs from the ground up.

The result is Letter to You, a distillation of the elixir of E Street: a thumping, sentimental, full-court press of unabashed vigour, designed to frappé stadiums. It is full of Springsteen bingo: trains, rivers, the edges of towns and women called Janey; a number of things are on fire.

It was all recorded live, except for the odd overdub; it took four days and one to listen back. Three songs are old – one, the excellent If I Was the Priest, so vintage that Springsteen played it at his 1972 audition for Columbia’s A&R John Hammond. Another, Janey Needs a Shooter nearly made it on to several Springsteen 70s albums. The bootleg version found him doing his best Dylan impression. This update turns a nuanced portrait of a love hexagon into a mid-paced thumper, sacrificing the song’s sexual intimacy for a piano- and harmonica-laced singalong.

On one level, Letter to You is utterly the wrong album for right now. With no prospect of mass live entertainment returning soon, the E Street Band will have to sit on their handsinstead of touring. Old-fashioned and nostalgic, this dose of retro 80s wish-fulfilment finds first world white guys with guitars spreading communion, certainties, endorphins and tinnitus. That’s not where young people’s music is now.

Inside this feelgood bubble, there are only brief nods to US politics. This album’s release on the eve of a pivotal election is no coincidence, however. Recently, just before Trump’s Pennsylvania rally, Springsteen’s Streets of Philadelphia soundtracked an anti-Trump ad by author Don Wilmslow.

In truth, Letter to You is cheesier than a Monterey Jack, shameless in its embrace of cliche. As well as burning trains and “faded pictures in an old scrapbook”, there is a “house of a thousand guitars”, an after-party where the music never ends and friends are reunited; agnostic bar band heaven.

The record starts with Springsteen alone, picking his guitar as a “big black train” comes “down the track”; rueful in the face of death. “One minute you’re here, next minute you’re gone,” he breathes, as the various members of the band assemble like light-footed superheroes – the muted piano of Bittan, the subdued thrum of drummer Max Weinberg and bassist Garry Tallent.

The album ends remembering the departed, dangling the prospect that they live on in our dreams – high-fructose corn syrup the E Street Band muscle into a dignified elegiac toast. In between, there’s another train, this one burning, and a song about love, The Power of Prayer, whose belief in “a pair of hearts” going all-in is a whisker off self-parody.

Conversely, then, Letter to You is exactly the album some people could use right now, a sledgehammer of succour and uplift, a heroic E Street pile-on of the kind fans and guitarist Steve Van Zandt have been lobbying for, for years. It might not be the dernier cri, but from the Killers via War on Drugs, to Lana Del Rey and, previously, Celtic punks the Gaslight Anthem and the Hold Steady, Springsteen’s stock has steadily risen among much younger musicians. Rainmaker rips into Trump, but with a superb allegory about “unloading buckshot into low clouds” during a drought.

Watch the video for Letter to You by Bruce Springsteen.

Giving people what they want is a slippery alleyway for an artist to sidle down, but Springsteen, the author of myriad solo landmarks, latterday tonal experiments and a film, could never be accused of picking low fruit. Here, the sound of master craftsmen leaking into each other’s amps provides a generous helping of the hoarse, overdriven Springsteen live experience – like a verboten lungful of other people’s warm CO2.

The powerful title track distils the essence of Springsteen messaging down the ages. House of a Thousand Guitars is a killer composition where “the bitter and the bored wake in search of the lost chord”, laced with knowing sadness that no such place exists outside a Springsteen gig. It’s an album about dead comrades whose stated ambition is to “leave no one alive”, a vision of American goodness in sharp relief to the bleak unravelling of the last several years.

... in the coming weeks, and the results will define the country for a generation. These are perilous times. Over the last four years, much of what the Guardian holds dear has been threatened – democracy, civility, truth.

The country is at a crossroads. The Supreme Court hangs in the balance – and with it, the future of abortion and voting rights, healthcare, climate policy and much more. Science is in a battle with conjecture and instinct to determine policy in the middle of a pandemic. At the same time, the US is reckoning with centuries of racial injustice – as the White House stokes division along racial lines. At a time like this, an independent news organization that fights for truth and holds power to account is not just optional. It is essential.

Like many news organizations, the Guardian has been significantly impacted by the pandemic. We rely to an ever greater extent on our readers, both for the moral force to continue doing journalism at a time like this and for the financial strength to facilitate that reporting.

We believe every one of us deserves equal access to fact-based news and analysis. We’ve decided to keep Guardian journalism free for all readers, regardless of where they live or what they can afford to pay. This is made possible thanks to the support we receive from readers across America in all 50 states.

As our business model comes under even greater pressure, we’d love your help so that we can carry on our essential work.If you can, support the Guardian from as little as $1 – and it only takes a minute. Thank you.

"It is full of Springsteen bingo: trains, rivers, the edges of towns and women called Janey; a number of things are on fire."

Almost lost my soup when I read this!

At least there's no one named Mary!

"It is full of Springsteen bingo: trains, rivers, the edges of towns and women called Janey; a number of things are on fire."

Almost lost my soup when I read this!

At least there's no one named Mary!

“Well sweet Virgin Mary runs the Holy Grail saloon, for a nickel she’ll give you whiskey and a personally blessed balloon.”

“Well sweet Virgin Mary runs the Holy Grail saloon, for a nickel she’ll give you whiskey and a personally blessed balloon.”