We all know exactly why President Trump fired FBI Director James Comey. It had nothing to do with the reasons enumerated in the attorney general and deputy attorney general's letters. 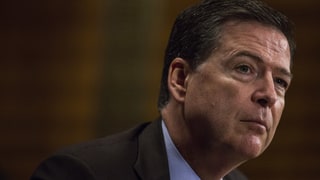 Next step is to look at "whether there has been a sufficient abuse to justify removing the president," says Richard Painter

Trump fired Comey because Comey was investigating his and his associates' ties to Russia. That's it. Attorney General Sessions had recused himself from the investigation, but unrecused himself long enough to join in the firing party.

Are you feeling the creeping terror? Me too. I've been trying to avoid joining the more conspiracy-minded brethren of the anti-Trump brigade for the last 110 days of his presidency, but this move makes it increasingly difficult not to suspect the worst.

There is no one, absolutely no one, in the federal government to hold the president of the United States accountable for anything he does. The Department of Justice should be run independently, but it's clear Jeff Sessions, whose recusal stems from his possible perjury at his confirmation hearing, will do nothing to make sure the president he supported from early on in the campaign follows the law. 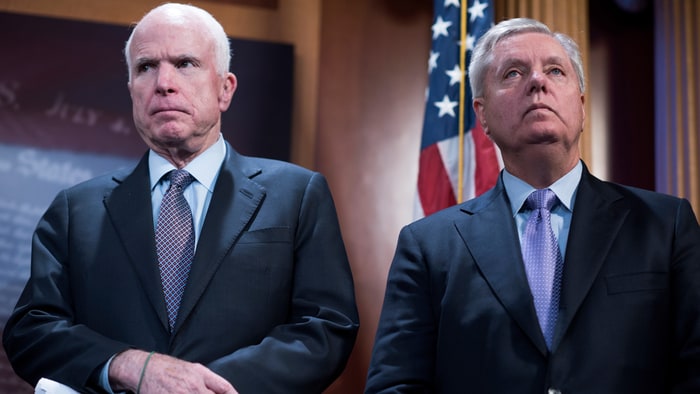 Republicans John McCain and Lindsey Graham have been critical of the president, but have stopped short of taking concrete action against him. Tom Williams/Getty

Sessions' deputy, Rod Rosenstein, reportedly has a good reputation as a career prosecutor, but joining in this farce of a firing should destroy that reputation. Thanks to Sessions' recusal, Rosenstein has the power to appoint an independent special prosecutor to lead the investigation into Trump's Russian ties, but that seems unlikely now. And even if he does appoint one, it's clear Trump would have no compunction firing both Rosenstein and the prosecutor.

The investigation into Trump doesn't fall into the judicial system's purview, and besides, any case that did make it to the Supreme Court would face a solid conservative majority. It's always possible that one justice or another might break ranks, but Bush v. Gore showed us the Court is not above playing politics.

Republicans control both houses, and so far they've shown no real interest in holding Trump accountable for anything he's done to break down America's democratic norms. Occasionally John McCain will take to cable news or the New York Times op-ed page to issue a gentle chiding; Ben Sasse, Lindsey Graham, Jeff Flake or Susan Collins may occasionally express some discomfort for something Trump says or something he does. But when it comes to action – to taking a real stand to stop this corrupt, sad excuse of a man – they have utterly failed.

So although McCain and a handful of fellow GOP Congress members have said, in the wake of the Comey firing, that there should be an independent investigation, I'm not holding my breath for them to take action to make it a reality.

Indeed, many Republicans in Congress are lining up behind Trump. Senate Majority Leader Mitch McConnell has already given a floor speech parroting White House talking points in defense of the Comey firing. (Yes, Democrats – including me – have criticized Comey. But the president firing the head of the FBI for investigating him still amounts to a constitutional crisis.) The head of the Senate Judiciary Committee, Chuck Grassley, took to Trump's favorite show, Fox & Friends, to tell critics of the firing to "suck it up and move on."

Trump is consolidating and expanding executive power in a way never seen in modern politics. Sally Yates, Preet Bharara, now James Comey – anyone who shows any independence or stands up to this president is summarily fired.

How is there not a single Republican in Congress – not one! – who will take a real stand against this president? How can not one GOP senator question whether we should be allowing someone this power-hungry and corrupt to appoint judges or set their legislative agenda? Why can't principled conservatives show some backbone and leave the Republican Party, which has become entirely the property of one Donald J. Trump?

Maybe it's too much to hope for. Maybe there just aren't any elected Republicans left brave enough to do what's right. But that leaves my country in the hands of a madman who will do whatever he wants, whenever he wants, and get rid of anyone who tries to hold him accountable. You feel that creeping terror? Me too.

I feel exactly like this writer.  No one in the Republican party is doing what is right for our country.  It's all about the party line and their own careers.

Did anyone see the video by The Hacker, Anonymous?  I don't agree with them very often but this last one regarding Trump and war with career hit home with me.  I can easily see him dragging us into war.  It would feed his ego even more and make him feel more like the dictator he wants to be.  In my eyes he's trying to turn this presidency into a dictatorship.

Down To The Riverside?
5 hours ago

Guys and Gals if you want to get the real down lo on Stevie's new book, check out this interview by Flynn and Hal
10/1/213:01 AM