Springsteen on Broadway: Showing Us How Many Lives We Contain

Two critics on the show’s return — a turning point in live theater and another stage in the rock star’s lifelong evolution.

By Jesse Green and Lindsay Zoladz

When the St. James Theater shut down with the rest of Broadway on March 12, 2020, the show playing there, aptly enough, was “Frozen.”

But 471 days later, the show that just reopened the theater — and Broadway more generally — is a totally different beast. Call “Springsteen on Broadway,” the singer-songwriter’s memoir-concert-ghost story, “Unfrozen,” because what’s playing now is an almost geological transformation of the relentlessly austere work that audiences experienced during its acclaimed run from October 2017 to December 2018.

Jesse Green, the chief theater critic, and Lindsay Zoladz, a pop music critic, saw the show on Tuesday night and reconvened on Wednesday to discuss, among many other things, the way changes of scale — and context — remake a rock artist, even in the theater. These are edited excerpts from their conversation.

JESSE GREEN “Springsteen on Broadway” first played the 939-seat Walter Kerr Theater. Now it’s in a theater with nearly double the capacity. To me, the new version couldn’t be more different from the old one. What about you, Lindsay? I presume you’ve seen Springsteen in venues that accommodate thousands.

LINDSAY ZOLADZ The previous two times I’ve seen Bruce were at Madison Square Garden and an open-air festival in Denmark, but this show still felt remarkably intimate to me. One of the most interesting aspects of the performance was the way it felt like a Broadway production constantly teetering on the edge of becoming a full-on rock concert. For the most part, I think it stayed firmly in the latter category, thanks mostly to Springsteen’s incredible command of the crowd — in thwarting their instincts to sing, shout requests or indulge in other arena-etiquette, he plays the audience like another instrument. But the more the show progressed, and especially when Springsteen brought out his wife, Patti Scialfa, for a pair of fiery duets, the more the atmosphere started to feel like something I haven’t had the chance to experience in over a year: a good, old-fashioned rock show. Jesse, did this feel more like a concert than what you’re used to reviewing? And as someone who saw the initial run in 2017 (I missed it on Broadway but caught it on Netflix), did this performance feel different?

GREEN On paper, or at least on the set list, the 2017 show and the 2021 show are nearly identical. Only three of the 15 songs have changed. With Scialfa last night, he performed “Tougher Than the Rest” as before but, instead of “Brilliant Disguise,” followed it with the much less theatrical and more traditionally sexed-up “Fire.” He replaced “Long Walk Home” with “American Skin (41 Shots),” written about the killing of Amadou Diallo in 1999 but here a pointed reference to George Floyd and the many other Black people more recently killed by police officers. And he closed with “I’ll See You in My Dreams,” a quiet, doleful song, instead of the barnburner “Born to Run.” These changes (it’s also 30 minutes longer) made it feel more like a concert to me because it is more varied and topical, acknowledging — as he also did in his rewritten narration — the 15 months we’ve just been through. I’m curious about how his demeanor, which is notably different now, compares with what you’ve seen in larger, more explicitly rock venues.

ZOLADZ I definitely noticed that his stage persona and his interactions with the audience felt different than a traditional Springsteen show — a little more irreverent, a little less focused on performing gratitude and thanks-for-coming-out-tonight earnestness at all costs. He opens with a tongue-in-cheek riff about how he’s revealing to us his rock-star “image”: “I haven’t done it yet,” he responds to the requisite applause, then waits a comic beat: “That’s it.” It seemed like that initial wink freed him up to embody this theatrical character of “Bruce Springsteen,” a slightly different construct than the hard-charging bandleader he’s playing in concert. But the fact that he’s able to calibrate so effectively between these different stage-selves shows what an expert’s grasp he has on his own stage presence.

GREEN Is “stage presence” the same in a theater as in an arena?

ZOLADZ One important difference in the grammar of a rock concert versus a Broadway show: Rock-concert banter is often expected to give at least the illusion of spontaneity (even if a lot of arena shows are just as meticulously staged and rehearsed as any play). Audiences want to feel like something special is happening in their city, on that particular night — there’s no greater concert faux pas than greeting a St. Louis crowd, “Hello, Cleveland!” “Springsteen on Broadway” has obviously been worked and reworked to hit the same beats each evening on the same stage, but through the charismatic kineticism of his performance Springsteen is able to enliven it with an energy that effectively keeps it from feeling canned.

GREEN He reads much of the script — which is already a gloss on “Born to Run,” his 2016 autobiography — from quite visible monitors, yet he is surprisingly adept at the illusion you mention: He plays himself, or a series of selves, with great confidence and skill. When he said he doesn’t understand himself even after 40 years of analysis, he sounded almost like a borscht belt tummler. This joke, true as it may be, would not have fit into the bleak cosmology of the original run, which left me stunned and often in tears; in that version Springsteen seemed to go to great pains to strip away all ingratiation in favor of the dark poetry of his story. Keep in mind that he was performing in the aftermath of the election of Donald J. Trump; he seemed to use that moment as a warning. Now, after 15 months of lockdown and worse, he offers much more comedy amid the severity: He does voices, impersonations and even, at the end, some crowd work. He affects a soothing familiarity, an almost Bidenesque folksiness. (I don’t believe it for a second, but it’s effective.) If his aim, as he says, is to be of “service” to society through his music, the show is his judgment about how that might best be done right now. I enjoyed it as much as the first time, and I found its shift in emphasis — its message that we may live with our ghosts and even draw joy from them — timely and moving; yet the earlier incarnation was, for me, more profound.

ZOLADZ So much of the show is about the power of memory, surviving and bearing witness. One of the most affecting segments is still that bluesy, hollered deconstruction of “Born in the USA,” during which Springsteen pays tribute to two young men who never got to grow old, veterans of his local Jersey Shore rock circuit who were killed in Vietnam. “Springsteen on Broadway” was already a show thoroughly haunted by loss (of his father, his bandmate Clarence Clemons, and his mother’s slow deterioration because of Alzheimer’s), so he didn’t have to change much for its tone to meet this particular American moment. Right now, we’re all coming out of hiding, trying to square our gratitude at surviving with the heavy weight of loss we’ve witnessed. Springsteen is certainly up to the challenge of providing that kind of catharsis, and of reminding survivors their responsibility to honor and eulogize the dead — that is, of course, what “Born in the USA” is all about. In the end, as he recited an “Our Father” in his own idiosyncratic cadence, the show felt not so much like a theatrical performance or a concert as a religious sermon — I certainly heard more than one “Amen.”

GREEN That was a new turn in this iteration. Early on he refers to being “duped” by the church as a child, and basically threatened into a lifelong submission to an unloving institution, yet after taking us through all the terrible contradictions of his childhood in the central New Jersey town of Freehold — that two-syllable oxymoron — and the more rewarding ones of a life in rock, he offers, at 71, in the church’s own words, what can only be called a benediction. I’m not even Roman Catholic and I felt forgiven for my trespasses.

ZOLADZ You mentioned earlier the change in the closing number: Instead of “Born to Run,” it’s “I’ll See You in My Dreams,” from his most recent record. He still opens with the wide-eyed “Growin’ Up,” the second track off his 1973 debut album. And while the set list doesn’t run exactly chronologically, this change underscores the fact that we’re watching not only a character’s coming-of-age, but the long evolution of a songwriter learning how to chronicle his inner experience and the world around him. The show’s bare-bones arrangements allow him to crack these songs open and find new riches inside even the most familiar tunes. I must have heard “Thunder Road” a thousand times in my life — at the risk of sounding basic, it’s probably my favorite Bruce song — but I don’t think it’s ever moved me quite as deeply as it did last night, hearing such a stripped-down rendition that focused on the wistfulness of its lyricism.

GREEN Cracking open his songs, he’s cracking open himself, and in the process showing us how many lives we each contain. I thought of that when entering the St. James, where anti-vaccination protesters have been demonstrating against the theater’s requirement that all audience members be completely immunized. The protesters might be happy to know that almost no one inside wore a mask — except, in a way, Springsteen, whose mask, if it ever comes off, merely reveals another and another.

One of my buds and fellow SPLr is at the show tonight.  I'm looking forward to his review. 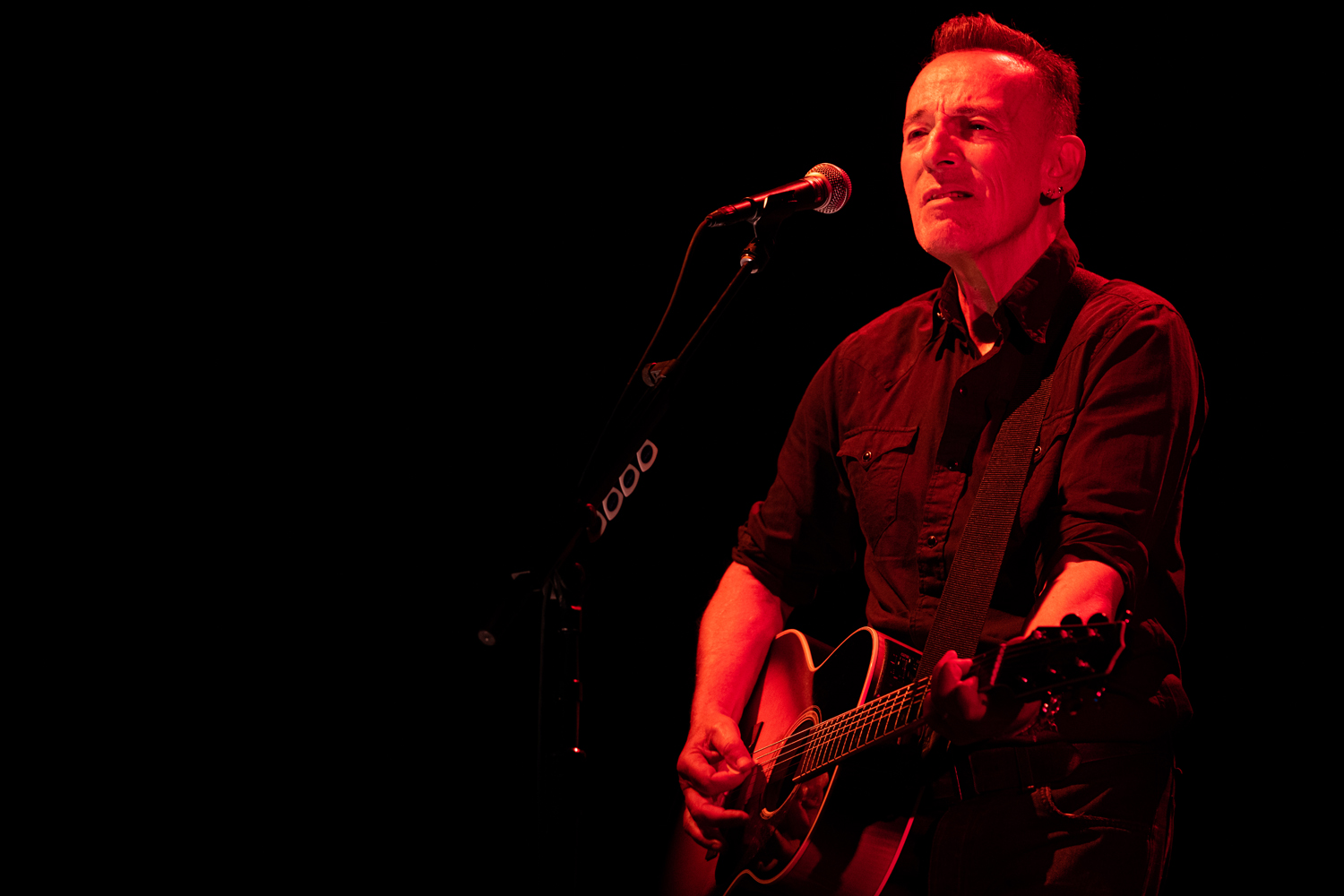