Did not see this one coming.

He needs more money? Those seats were very EXPEN$IVE.

Hopefully they’ll be a little more reasonable. But I’m not holding my breath.

We had tickets the last time and couldn't go due to my mother-in-law's passing. We'll try again this time, again for the cheap seats. Get me in the building!!

Thinking of doing it this go around.  Any idea on the ticket price range?

Bruce Springsteen Will Return to Broadway in June

“Springsteen on Broadway” opens on June 26 at the St. James Theater; audience members will be required to show proof of full Covid-19 vaccination to enter. 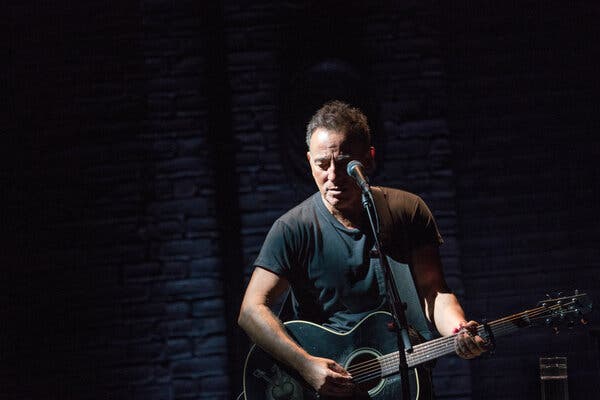 Bruce Springsteen is returning to Broadway.

“Springsteen on Broadway,” the rock legend’s autobiographical show, which ran for 236 performances, including seven previews, in 2017 and 2018, will open on June 26 at the St. James Theater, at 246 W. 44th Street, and have additional performances through Sept. 4, according to an announcement. As of now, the show will be the first to open on Broadway since the pandemic shut down performances in March 2020. While some Broadway productions have set return dates as early as Aug. 4, most have targeted mid-September for their reopenings.

Tickets go on sale Thursday at noon Eastern time through SeatGeek, the show’s official ticket seller. SeatGeek, a challenger to Ticketmaster, has a deal with Jujamcyn Theaters, which operates the St. James as well as the Walter Kerr Theater, where “Springsteen on Broadway” had its initial run.

Although Broadway theaters and producers have said they plan to reopen their full lineup of shows after Labor Day, the speed of vaccination, and promising downward trend of coronavirus cases in the United States, have encouraged many performers and producers throughout the entertainment industry to move forward quickly.

“Springsteen on Broadway” — which had its genesis in a private performance at the White House in January 2017, in the closing days of the Obama administration — is a mostly solo show by Springsteen, drawing from his catalog of hits and his 2016 autobiography, “Born to Run.” The show weaves in stories from throughout Springsteen’s career, with insights into how he wrote songs like “Born in the U.S.A.” (His wife, Patti Scialfa, joined him in some songs.)

The show was a blockbuster hit, selling $113 million in tickets and playing to a total of 223,585 fans. It was also filmed for a Netflix special of the same title, which went online shortly after the last performance in December 2018.

Proceeds from the opening night of “Springsteen on Broadway” will be donated to a number of charities, including the Boys & Girls Clubs of Monmouth County in New Jersey, Broadway Cares/Equity Fights AIDS and Food Bank for New York City.

Looks like prices will be the same as the last go round.  This is from the Jujamcyn Theater site:

Damn, that's expensive but I will see what I can pull up.

Hopefully they’ll be a little more reasonable. But I’m not holding my breath.

Just a real shame he couldn't have done London's West end this time around, sigh....

Hope it's a fresh content this time. Reason why the Netflix released the show was because the Broadway thing was over. Also we are living in a different world.

Fresh would be nice, but not a lot of people actually attended the original.  You could easily fit all the attendandants of the first run into one outdoor Wembly show.  The theater only holds around 800 people, and many people saw multiple nights. Watching a video is not the same as a live performance, I’m sure you’ll agree.  After watching the video, there have to be people who passed on tickets last time who would now want to see it live.

Just a real shame he couldn't have done London's West end this time around, sigh....

The man is 71, he likes sleeping in his own bed every night now!

Queue has moved a millimeter since I put in the date I wanted.

Hasn’t moved. I guess they let 1 person in at a time. I haven’t even selected a date yet.

I was able to get in and I am just not willing to pay $300 a ticket before fees for what are pretty bad seats.  I would rather pay that for great seats to a full concert.

Found one date with $75 seats, but only singles. All other dates were 300+, and I'm not going there.

I don't know if I was gonna get tix but wanted to see what came up. Line never moved. On one of the FB groups so many people saying they got through on ipads, phones and such. "Go to dates listing page "select date" on the main Seatgeek site" says one. How do you do that. The heck with it, gave up.

Yu have to download the SeatGeek app to your phone. I got in that way and was able to pick dates, but I wasn't paying loan-shark prices.

I didn't do that, I got on late just on phone with browser, not the app. I felt the same as you.

Springsteen on Broadway. Fresh off the wire…
2 days ago