Bruce Springsteen, Jon Stewart, and More: 10 Highlights from Stand Up for Heroes 2019

A surprise Springsteen–Sheryl Crow duet, hilarious sets by Stewart and John Oliver, and other standout moments from the annual veterans fundraiser

By
ANDY GREENE
Sheryl Crow and Bruce Springsteen perform during the 13th Annual Stand Up For Heroes benefit at the Hulu Theater at Madison Square Garden in New York City on November 4, 2019.
Nicole Fara Silver for Rolling Stone

Twelve years ago almost to the day, ABC news correspondent Bob Woodruff — who was seriously wounded in Iraq while covering the war in 2006 — brought Conan O’Brien, Lewis Black, Robin Williams, and Bruce Springsteen to New York’s Town Hall to raise funds for wounded veterans. The Stand Up for Heroes benefit (the start of the week-long New York Comedy Festival) has been held every year since, moving up to the Beacon Theatre and then the Theater at Madison Square Garden, raising over $55 million in the process and helping countless American heroes rebuild their lives.

The lineup rotates a bit each year, but Bruce Springsteen has been at every single one besides the 2017 show when it conflicted with his Broadway schedule. He’s always joined by many of the biggest names in comedy for an incredible evening of music, laughter, and moving speeches about the incredible work of the Bob Woodruff Foundation.

1. Frédéric Yonnet Covers Led Zeppelin
Frédéric Yonnet was the least well-known artist off the night, but the jazz harmonica player — who has worked with Stevie Wonder, Prince, John Legend, John Mayer, and many others — won over the crowd with an incredible, epic rendition of Led Zeppelin’s “Kashmir” backed by his group. Even many of the fans dressed in vintage Springsteen tour T-shirts seemed to be surprised by how much they were enjoying themselves.

2. Jon Stewart Takes on the College Admissions Scandal
Many of the comedians from the night got their big break on The Daily Show, so it only made sense for the comedy portion of the evening to kick off with Jon Stewart. He’s kept a relatively low profile since retiring from the Comedy Central show four years ago, but he’s clearly kept up with the news and packed a lot of topical jokes into his 12-minute set. The college admissions scandal got him particularly fired up. “The whole thing made me realize that between Hunter Biden sitting on the board at Burisma and Aunt Becky going to prison, I really feel like I don’t do shit for my kids,” he said. “I don’t do shit for these people! There are people out there going like, ‘Honey, I’m going to go to jail for 40 years so you can major in nutrition.’ And with my kids I’m like, ‘I am not driving you to the diner! Not going to happen!'”

3. Ronnie Chieng Slays the Room
Without a doubt, Ronny Chieng got the biggest laughs of the entire night with his observations about America from the perspective of somebody who has lived in the country for just four years. “All these anti-vaccination people are reading some bullshit on the internet, getting brainwashed and not vaccinating their children,” he said. “Yo, the Internet is making people so fucking stupid. Who knew all of human knowledge could make people dumber? In 50 years we’ll look at the internet the way we look at smoking now. It’s going to be like, ‘Man, I can’t believe that 50 years ago we just let pregnant people use the internet. What were we thinking?'” 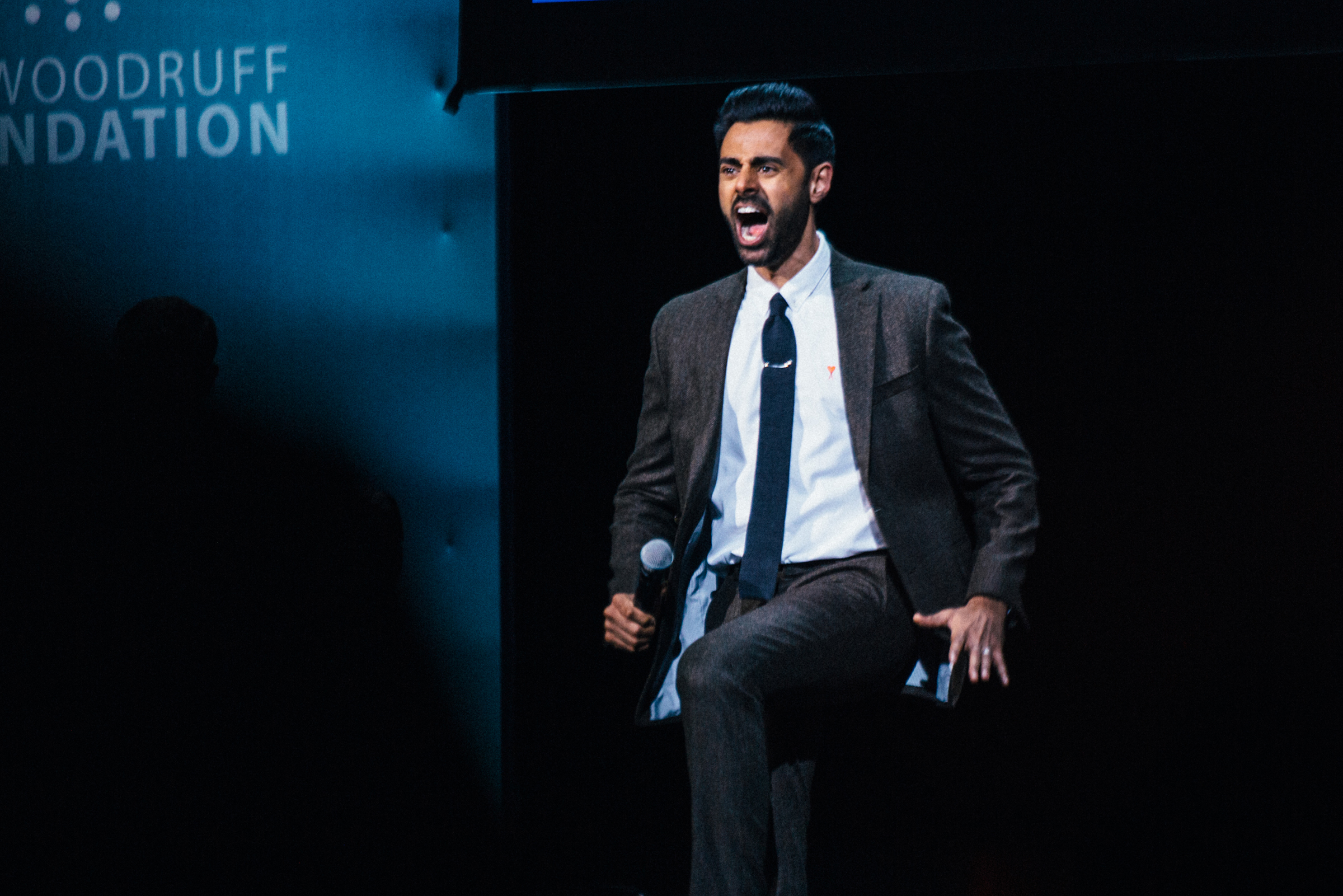 4. Hasan Minhaj Tackles Race and Religion
Hasan Minhaj’s set was quite brief, but he used the time to a talk about his young baby and life as an Indian American. “[My daughter] is Indian and Muslim, like me,” he said, “That’s such an interesting combination, to be something that people love … and then also be something that people fucking hate. It would be like if one half of you was Oreo cookie and the other half was Muslim. I can’t think of a better analogy! My dad will call me and be like, ‘Just lean into the Indian part! People respect that. Eleven straight spelling bees.'”

5. John Oliver Looks Back at Anti–Anne Hathaway Hysteria
John Oliver told the crowd that he’ll know America is back to normal after Trump leaves office when we are once again “furious with Anne Hathaway.” As bizarre as that sounds, he made a decent point. “There was a time around 2011 I was angrier with Anne Hathaway than I was with any other human being on Earth,” he said, “despite the fact — now this is important — she’s never actually done anything wrong. Nothing! She deserved no criticism, and yet do you remember how she pissed people off? She hosted the Oscars and she tried really hard. That got under people’s skin. Then she won an Oscar and seemed genuinely touched and humbled by the experience. That was just a red rag to a bull. … Since Trump won I haven’t found it in myself to be annoyed with Anne Hathaway anymore. Do you know what seems more important? Every other thing happening every fucking second.”

6. Sheryl Crow Goes Back to the Nineties
Backed only by her longtime guitar player Peter Stroud, Sheryl Crow kicked off her set with her 1996 hit “Everyday Is a Winding Road.” She ended it with a solo piano rendition of “I Shall Believe” from her 1993 debut LP Tuesday Night Music Club with a bit of Burt Bacharach’s “What the World Needs Now Is Love” tacked onto the end of it. Not many in the crowd seemed to know the song, but it was a fitting finale.

7. Bruce Springsteen Joins Sheryl Crow
Midway through her set, Crow told the crowd she was going to sing a song entitled “Redemption Day” that she wrote in 1997 after playing for overseas troops. Years later, it was recorded by Johnny Cash and Crow’s new LP, Threads, features a virtual duet of them singing it together. “But tonight I get the special thrill of inviting Bruce Springsteen to play it with me,” she said as cries of “Brooooce” filled the air. “I used to worry early when I’d see Bruce play, ‘Why are they booing?'” Springsteen had never played the song in public before, but they traded off verses with great ease.

8. Bruce Springsteen Dusts Off the Classics
Springsteen’s live performances this year have been largely limited to brief, surprise guest spots at shows by the likes of Little Steven and the Disciples Of Soul, Joe Grushecky, Danny Clinch’s Tangiers Blues Band, and Southside Johnny and the Asbury Jukes. That meant there was even more anticipation than usual for his set, which began with an emotional “Bobby Jean” and then went into the Magic deep cut “I’ll Work For You Love” and the Born in the U.S.A. classic “I’m on Fire” that had many in the audience singing along. This is not a show with cheap tickets, but the thunderous reaction to these three songs alone made it seem like nobody would regret their purchase. 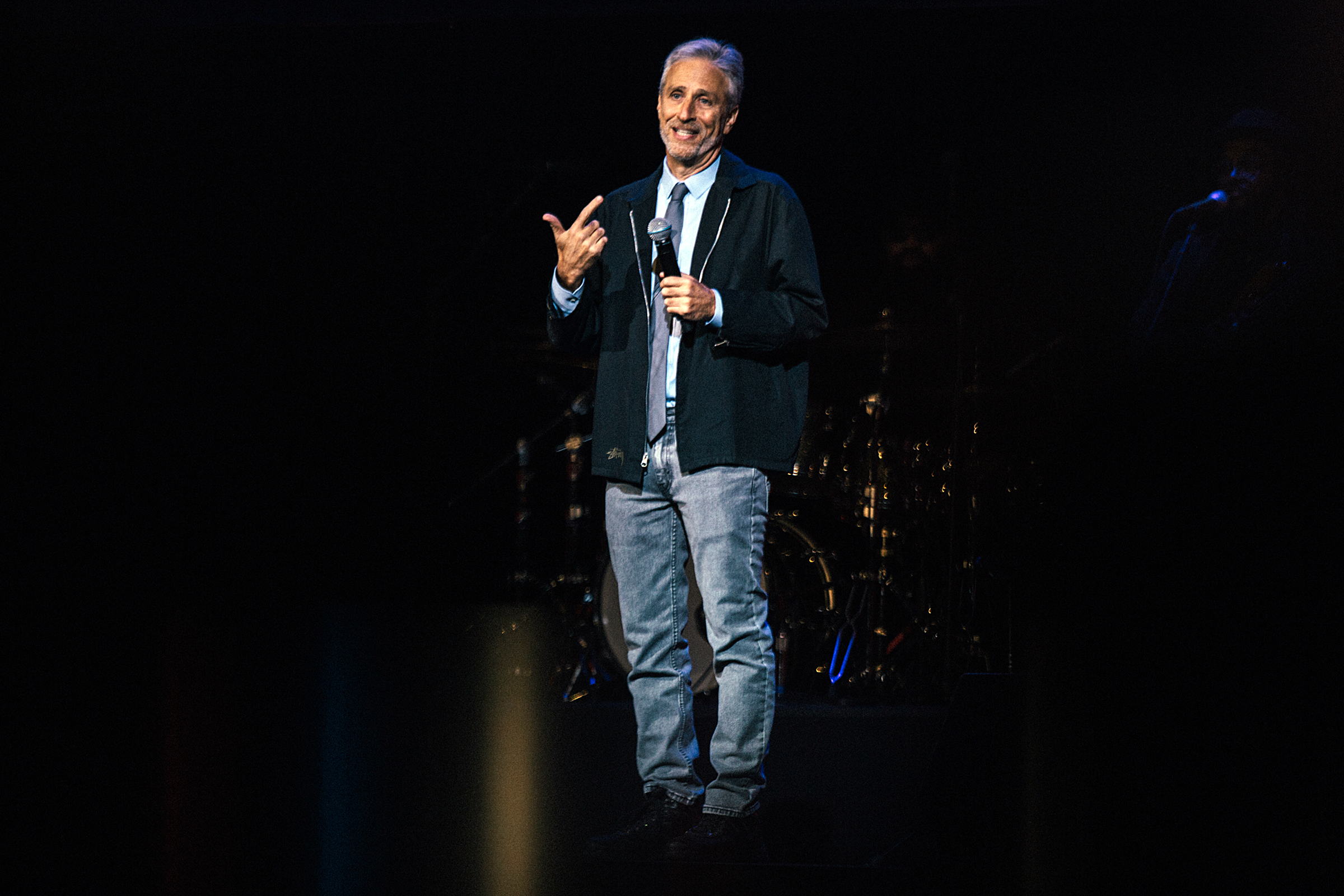 This next one was a little less successful: “There’s a guy Bob and his close friend Ray. They were going to school together. Ray became a cop and Bob became a hedge-fund manager. They are close, but there’s only one thing that bothers Ray about Bob. Bob is always talking about his shit. He’s talking about his car, his house, his Gucci clothes. It gets on Ray’s nerves. And so Bob is coming from work one night and he hears a funny noise in the car. He pulls the car over, opens the door to see what the problem is and an 18-wheeler comes along and rips the door right off the car. So Ray shows up in his squad car and he gets out and Bob says, ‘Jesus Christ, look what the truck did to my Beamer, man.’ ‘Your Beamer? You’re arm’s been torn off!’ ‘My arm’s been torn off?! What happened to my Rolex?'”

10. Bruce Sends Everyone Home Broadway-Style
Many past Stand Up for Heroes shows wrapped up with Springsteen auctioning off an electric guitar, private lessons, and even dinner at his New Jersey house complete with a lasagna from his mother’s own recipe. The organizers seem to have retired the tradition in the past couple of years, though they did raise more than a million dollars earlier in the night from audience donations. And the show finished off with stirring renditions of “Dancing in the Dark” and “Land of Hope and Dreams.” It was the same sequence from Springsteen on Broadway and it sent everyone out onto the New York streets quite happy and eager to come back next year to see what dirty jokes and acoustic songs Springsteen will have for us then.

Bravo, sorry I missed it.

Better show than usual, it's usually better to just donate to the charity than go, rather than suffer through more bad than good comedy, endless gabbing and auctions, for a few songs. But the music seems to be better this year. I didn't realize Sheryl  was that good on guitar, really good acoustic playing by her, tremendous version of LOHAD by Bruce, great strumming and vocals (starts around the 4 minute mark):  https://www.youtube.com/watch?...10&v=L50sqx9fYjg