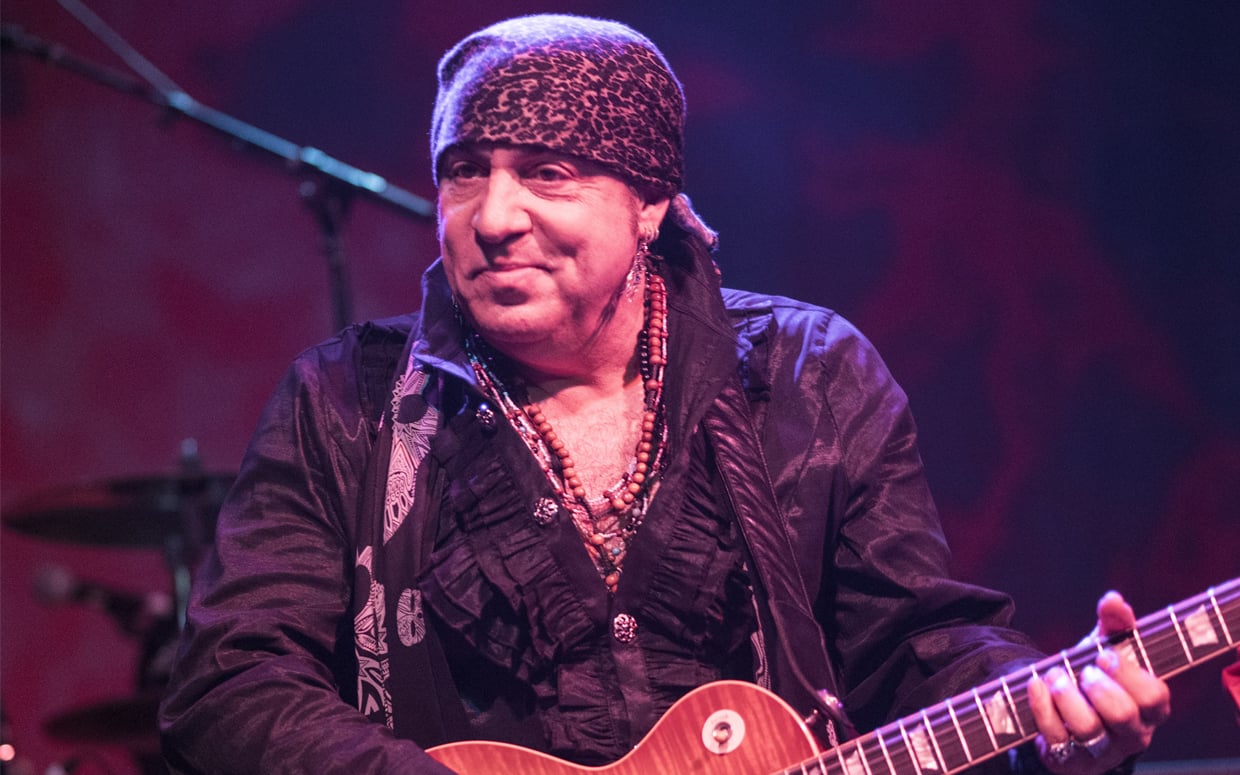 Will the real Steven Van Zandt stand up? The Jersey boy is a Rock and Roll Hall of Famer who’s played with Bruce Springsteen and the E. Street Band off and on for decades. He played Silvio, Tony Soprano’s mob sidekick, on six seasons of HBO’s The Sopranos. He’s introduced over 1,000 new bands in the last 15 years on Little Steven’s Underground Garage, which is syndicated to 100 countries and on SiriusXM.

And he’s an activist known for embracing causes such as ending apartheid in South Africa. Now, Van Zandt, 67, is hitting the road from October 18 through December 16 with his band, Little Steven and the Disciples of Soul, and he’s inviting educators to attend shows for free.

“The Soulfire Teacher Solidarity Tour is a way of saying thank you to teachers,” says Van Zandt, whose Rock and Roll Forever Foundation has developed a K-12 interdisciplinary curriculum teachers can use in their classrooms using music to inspire students. “It’s our chance to talk to them on the grassroots level.”

Parade.com caught up with Van Zandt recently to hear all about the inspiring foundation and why the former lackluster student loves reaching out to teachers.

Tell us about the Rock and Roll Forever Foundation.

The main project has been teachrock.org, which we’ve been working on for 10 years. It’s a music history curriculum—130 lessons are online and available so far—for all ages, all grade levels. We’re working very hard to be contemporary for the young kids.

Now it’s time for some teacher outreach, so we invite teachers to come to the show for free. Depending on the size of the venue, we put aside 400 or 500 tickets for teachers. I didn’t realize this, but teachers pay for their own professional development. They have to complete 20 or 30 hours every year just to get their certification. Their salaries are terrible as it is, so we have them come early and we do an hour of professional development right at the venue. It’s just a way of saying thank you to teachers and give them some tools.

Why does your program teach math or history through music and artists that kids love?

I thought we need to start making an adjustment for the modern world. We can’t keep trying to teach kids the same way we were taught.

So this is the way. Every kid is into music. I don’t care how shy, how introverted, what race, what gender, it doesn’t matter. They all are experts in one thing, which is their own taste. We use that as a way of connecting. The teacher says, “Who are you into? Who are you listening to?” Whatever the kid says, we say, “OK, let’s trace it back. Let’s see where they come from. Let’s talk about the history.” It’s a very simple idea.

There’s some irony here. You’ve said you were not the best high school student.

I was the worst.

What would it have been like if you’d had this opportunity?

I would’ve loved this! The idea is for this to be the cool class, the class that every kid wants to take, the one they look forward to. Give them the energy to take into other classes that they’re not so interested in.

Every statistic says if a kid likes one single class, or one single teacher, they’ll come to school. We’ve got a dropout epidemic that nobody’s talking about. Literally 50 percent of kids in the poor neighborhoods are dropping out. Where are we going to be in 20 years?

Well, first it was church, before I switched my religion to rock and roll, which I did at around the age of 13 or 14. Before that I was very religious. I was born a Catholic. My mother remarried, Bill Van Zandt, who adopted me. He was a Baptist Protestant. I did the whole thing. I accepted Jesus Christ, got baptized at age 12 or 13, went to Easter sunrise service, which was a big test for how religious you were. I went to church and Sunday school right up until I saw the Beatles. Then, literally, that became my religion to this day.

Did your family get together for big Sunday dinners?

Yes, we’d go to my Italian grandmother and grandfather for dinner every Sunday. The whole family would gather there, whoever was in Jersey.

Sunday morning we had pancakes, which is always fun. Then Sunday night was The Ed Sullivan Show, which the entire family watched. That was the routine for our generation up until The Sopranos replaced him.

Right! The Sopranos was the definition of appointment TV before everybody binge-watched shows. And speaking of shows, have you seen Springsteen on Broadway?

Oh, yeah, yeah, yeah. Saw it a couple times. It’s terrific. It’s just as good as you would imagine it would be. It’s just fantastic. It’s a whole new art form that he has mastered. He’s incredible, I’ve known the guy my whole life and he keeps impressing me. Like he writes a fabulous book, which was much better than it needed to be.

You’ve been involved in many important causes over the years. How did you get this idea?

Originally the Music Teachers of America came to me and said, “Listen, this No Child Left Behind legislation is canceling all the art classes in schools.” An unintended consequence, I’m sure. They started focusing on math and science, in an obsessive way to the point where they were literally canceling all the arts classes in America. I thought, OK, we’re not going to get instruments into kids’ hands any time soon, and maybe never again, tragically, at least not in public schools.

So I said, “Let’s do music history instead.” We can reach every single kid, keep music alive in the school system. It can be music class, history class, English, social studies. The music teachers endorsed it and we went from there.

Plus, you’re touring and doing your own music again.

It’s been a wonderful year coming back into the music business for me because I’ve been away for 25 years from my own work. Obviously, I work with Bruce [Springsteen] and did some TV shows but I’ve been kind of ignoring my own artist’s life. Now there’s the Soulfire and Soulfire Live album. I’m trying to reconnect with my own music.

The Dave Clark Five, The Kinks, The Who, The Lone Stars, The Yardbirds, The Hollies. “They were what got me into music. Up until then there were a lot of solo artists and singing groups but there weren’t really bands until the British Invasion.”

Soraia, Ryan Hamilton, Harlequin Ghosts. “There are so many. We are introducing the first album of Richard and the Young Lions, a group that was formed in the ‘60s that never made an album. They reformed and we’re putting out that album [on Wicked Cool Records, founded by Van Zandt]. Very exciting.”

Name He Prefers
“
Stevie or Steven is fine. I’m not crazy about Steve.”

Sign In To Reply
Post
I usually stay out of the political arena with my posts especially in our Springsteen Discussion topics but...
19 hours ago

Trailer: Letter to You Documentary
19 hours ago

"Farewell To The Thief"... If you missed the latest Chapter of From Our Home To Yours...
1 day ago

A 4 minute video interview with Thom Zimney from S. Florida's Channel 6
1 day ago