The Boss will play a hometown show in Asbury Park on Monday, but as luxury apartments spring up around the seaside resort, not everyone is pleased

Inside Asbury Park’s showy new music venue Asbury Lanes, locals stare open-mouthed at what used to be a retro bowling alley played by local bands and burlesque acts. Where just a few years ago there was an orange drop ceiling, some old lanes and a bar with $4 grilled cheese, there are now sleek liquor cages struck by cool blue lights.

Kurt Vile and the Violators are on stage, the mostly acoustic band formed by the War on Drugs former lead guitarist, in front of a neon and strobe backdrop flashing in sync with the low-key indie rockers’ vibey tunes. 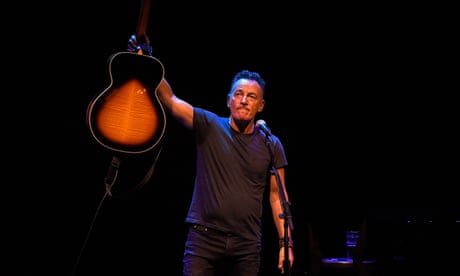 End of the guitar? Gibson bankruptcy fuels fears for future

“It’s good to be back,” Vile told the crowd. “I live just over the river in Philly,” he said, and traded out another guitar before sinking back into the music. The stage was flanked by stacks of old guitar amps (they’re just for decoration), and an after-work crowd nodded along.

Asbury Park is a seaside town, part of Jersey shore, where working-class surfers, artists, musicians, gay men and women and African American culture mixed for decades. It’s bordered on the east by a kitsch-filled stretch of boardwalk along the Atlantic.

Even on a cloudy day in the middle of the week, the air smells vaguely of hotdogs and funnel cake (a calorie bomb of fried dough covered in icing sugar). Sea myst floats off the Atlantic, toward attractions like the pinball museum and its life-sized fiberglass Elvis.

Asbury Park’s long history of false starts at redevelopment, in many ways, allowed these groups to continue to live in the 1.5 sq mile town, bordered by more affluent and conservative stretches of beach.

This town is best known for fostering the state’s most beloved export: Bruce Springsteen. His 1973 debut album Greetings from Asbury Park thrust the town – and its pushers, peddlers and conmen – into rock’n’roll imagination. It’s only an hour from New York, but feels a world away.

“The Turnpike (an inter-state highway) goes from New York to Philly,” said Vini “Mad Dog” Lopez, the former drummer for Springsteen’s E Street Band. “It don’t stop in Asbury Park. Even though people might think it’s a mecca, it’s got a long way to go.”

Vile, whose bandmate described him as “Bruce-obsessed”, closed with the Born in the USA deep cut Downbound Train.

Asbury Lanes is just one piece of an enormous waterfront redevelopment. The long-awaited, and now hotly contested, changes to the seaside have already started to arrive: the boutique Asbury Hotel recently opened, blocks of new luxury condos sell for $800,000, rooftop restaurants and a bandshell are being built.

The centerpiece of these changes is a 17-storey, still-under-construction block of luxury apartments and hotel rooms, built just steps from the low-income residents who moved to the shore when Asbury was down and out. Developers believe the apartments will start at nearly $1m.

They turned something really cool into the Hard Rock Café

The site sat half-finished for the better part of 40 years, as one developer after another went bankrupt. Undoubtedly, locals are relieved to see it gone. But, in a town where most buildings are no more than four storeys high, its replacement looms over the town like a giant.

Prosperity, however, has come with contention.

“They turned something really cool into the Hard Rock Café,” said Dale W Miller, a musician whose former band, Atlantic/Pacific, played the old Asbury Lanes. Its quirks – bands played on a stage over the lanes and people bowled in either side – were what many locals felt made it great. About the new venue, Miller said, “I’m not feeling it.

One patron to the Vile show acknowledged, “all places close” and looked up into the high ceilings of the new Asbury Lanes, “processing”. Others described the venue as “over the top” or “Vegas”. One said simply: “It’s really different.”

Springsteen will play a show here next week as part of the Asbury Lanes’ grand re-opening. Tickets are nearly impossible to come by. Rather than paying Springsteen for the show, the promoter donated $125,000 to the Boys & Girls Club of Monmouth County, a charity which provides after-school programs for children.

Since Springsteen’s debut put the town on the map, Asbury Park has been plagued by blight, corruption and crime. As one resident told the New York Times in 2003: “I can’t even walk my dog without 18 people asking me if I want to buy coke.”
Now, as the town experiences an economic boom, long-time residents are ambivalent about the lopsided change.

“When I came here in 2000, all there was was art galleries,” said Amy Quinn, the deputy mayor. When people walked the streets, they’d be “met with drug dealers or prostitutes or whatever”.

“Was it a bad time for quality of life? Yea. But people took it on themselves to get on a planning board or zoning board,” and improve the town, she said. “As a result, we have corporations coming in and developing.” Asked about Asbury Lanes, Quinn winced, “There’d be no new Asbury Lanes without the old Asbury Lanes.”

In addition to Asbury Lanes, developers now own many of the venues most closely associated with the brand of New Jersey quirk that brought Asbury back. For example, the Stone Pony, made famous by Springsteen, is also owned by developers.

“It’s much more expensive than it used to be,” said John Lyon, best known by his stage name Southside Johnny. “But it was also dangerous in Asbury Park.”

His band, the Asbury Jukes, played around the same time Springsteen was penning songs for the E Street Band and living above a surfboard factory in early 1970s Asbury. “It’s not so dangerous anymore,” Lyon said, and added, “Artists always find a place to live, even if its five people in an apartment.”

The depths of Asbury Park’s nadir can hardly be overstated. The seaside resort was relatively wealthy, though segregated, in the 1930s. Two grand structures, the Casino and Convention Hall, still bookend either side of Asbury’s boardwalk, are now owned by developers.

But as the decades went on, it slid into decline. Frank Sinatra, a Jersey native himself, derisively compared Asbury Park to failed romance in his 1962 song At Long Last Love (“Is it Granada I see, or only Asbury Park?”). But the town was already sailing toward what was likely the most cataclysmic event in recent history. After years of segregated beaches, schools, and housing, race riots rocked the town in 1970. Businesses were looted and burned.

“It started when Dr King was killed”, said Freddie Richardson Jr. “It was chaos.” He was 17 when the riots started. Richardson, a black man and a Muslim, now lives in Florida. People, he said, were “unbelievable distraught”. There was, “a lot of injustice – blatant injustice.” People, he said, “kind of threw up their hands.”

This was around this time Springsteen and other musicians played around Asbury Park, trying to convince booking agents audiences wanted to hear original music – not top 40 covers.

“I got in a band, and we started listening to all the other bands,” said Lopez. Today, Asbury Park is one of the hippest spots on the Jersey Shore. Business has been “incredibly busy”, said Glen Jones, who works in the Silverball Museum pinball arcade. “I’ve watched the progress since I moved here,” in 2008, he said. Another resident said he rented his loft for the summer to a couple for $20,000 (one half of whom worked for Goldman Sachs).

“It’s definitely changed,” said Bichone Syphax, a lifelong Asbury resident, about the town. Even today though, he said, prosperity is uneven. “I would just like to see more unification, instead of being divided by the tracks.”

In large part, Asbury Park was shaped by the people the rest of the Jersey Shore pushed out – working-class musicians, gay men and women, African Americans. Today, the city remains a liberal bastion among fiercely conservative Jersey shore towns.

For musicians, locally owned venues still act as a proving ground. Asbury Lanes, now booking national acts, has to fill a 760-person hall. The Saint, on Main Street, caps out at 150.

The bar is a dimly lit box, cluttered with posters and layers of graffiti that evidence a well loved venue.

A ceiling fan helplessly attempted to cool the packed house, as the house music went down. Broadly, Saint owner Scott Stamper said, Asbury Lanes could be a positive development for Asbury’s music scene.

“We will lose some here and there,” Stamper about shows, as the Asbury Park-based band Parlor Mob prepares to go on.

Moments later, Parlor Mob unleashed a fretboard climbing, ear-ringing basher that picked up where Led Zeppelin and the White Stripes left off. People lifted drinks to the sky and pushed to the front as the band builds a blues tune.

“These guys,” said Stamper, as he picks up his phone to stream video, “I think they have a chance to tour the world.”

… we have a small favour to ask. More people are reading The Guardian than ever but advertising revenues across the media are falling fast. And unlike many news organisations, we haven’t put up a paywall. We want our journalism to remain accessible to our global audience. Our readers’ contributions enable us to maintain this openness, so we can all access accurate information and analysis.

The Guardian’s independent, investigative journalism takes a lot of time, money and hard work to produce. But we do it because we believe our perspective matters – because it might well be your perspective, too.

I appreciate there not being a paywall: it is more democratic for the media to be available for all and not a commodity to be purchased by a few. I’m happy to make a contribution so others with less means still have access to information.Thomasine, Sweden