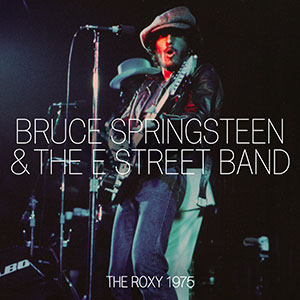 Culled from the four-night Roxy residency on the Born to Run tour, the October 18 early show captures Bruce and the E Street Band on a mission to conquer Los Angeles. Newly mixed from restored multi-track tapes, the previously unreleased complete concert (one day after the oft-bootlegged radio b-cast) spotlights six tracks from Born to Run along with magical covers of Jackie DeShannon’s “When You Walk in the Room,” Chuck Berry’s “Carol” and a stunning rendition of Carole King’s “Goin’ Back,” only performed at the ’75 Roxy stand.

Thinking Young And Growing Older Is No Sin When the Born to Run tour rolled up to the Roxy in West Hollywood in October 1975, the objective was to break Springsteen in Los Angeles with a high-profile, six-show/four-night residency at the small club, mirroring the famed Bottom Line run in New York in August. Incredibly, Springsteen had yet to play a proper headlining date in LA until the Roxy gigs. His only appearances in the area circa 1973-74 were as an opening act or sharing a bill with other Columbia Records talent at label-sponsored showcases.

The Roxy run came just a few days before Bruce would grace the covers of Time and Newsweek simultaneously, so while it wouldn’t be accurate to say he was flying under the radar, DEFCON 1-level hype was still to come. Though make no mistake, Columbia saw the Roxy shows as their chance to capitalize on the growing buzz.

As legend has it, opening night on October 16 was a show packed with music journalists and industry types, prompting Springsteen to declare the following evening (as broadcast on KWST-FM), “ain’t nobody here from Billboard tonight!” That phrase became the de facto title of one of the earliest Bruce bootlegs, pressed from a recording of the b-cast.

On October 18, night three of the run, Springsteen performed two shows (one early, one late) and Columbia arranged to have Wally Heider’s mobile recording truck parked outside to capture the performances for future release. The engineer was the late Ray Thompson, a legend in live recording, and the man who just a few months earlier had taped the shows that would go on to form the basis of one of the biggest live albums of all time, Frampton Comes Alive!

Though one song from this stand made it onto Live/1975-85, this marks the first-ever release of a full performance from the Roxy ‘75, the early show on October 18. That song was of course “Thunder Road,” which kicks off Live/1975-85 and represents the only pre-1978 track on the box. Though it’s familiar, hearing the performance restored to its proper context opening a full ‘75 show reinforces the audacity of the sublime, piano-first “Thunder Road.” Who opens a show with a completely reimagined version of the first song on their latest album? It’s a gutty and admirable artistic statement.

Following that stunning start, the rest of the band join in and launch into a winning and crisp “Tenth Avenue Freeze-out,” then roll into “Spirit in the Night.” Listening to the truly you-are-there mix by Jon Altschiller (complete with clinking glasses and bottles), one can’t help but recognize the audience’s relative unfamiliarity with the material. If you’ve listened to a lot of live shows, even circa-1975 East Coast crowds knew “Spirit in the Night” inside out; here the reactions to the stops and starts of the tale unfolding sound more intrigued and surprised.

That’s because the tiny Roxy was packed with fans who had never seen Bruce perform before. “[I’d like to] thank the folks that came out and seen us last year and the year before in Santa Monica,” Bruce says, met by nary a clap or cheer. “I don’t know if there is anybody….[Laughs] Nobody made it to that one.”

Aside from the guy who yells, “I was at the Troubadour,” and perhaps a handful of others, the Roxy crowd was the Springsteen-curious, and some of the pleasure of this exquisite recording is that over the course of the show, we get to hear and bear witness to their conversion into fans.

A big first step towards that comes with “E Street Shuffle,” in which every member of the E Street Band shines, but especially those oh-so-sweet swirls from Danny Federici’s organ cabinet. Remember, “E Street Shuffle” is another radical rearrangement from what anyone would have heard on the second album, and after Bruce tags Sam Cooke’s “Having a Party” onto the end, audience applause moves from like to love.

Cover songs were a major feature of Born to Run tour setlists, especially songs from the ‘60s that shaped Springsteen’s musical palette. With the Roxy, we get the first official release of the enchanting “When You Walk in the Room.” Written by Jackie DeShannon and a hit for the Searchers, the song is a perfect vehicle for Bruce and the band to show their Merseybeat-via-Jersey Shore chops. If this performance doesn’t raise a smile, it’s time to resign your fanclub membership.

“She’s the One” and “Born to Run” dial up the intensity, both impeccably performed in powerful, pacey versions that underline the outstanding mid-tour form of the band. When one of the few familiar fans shouts for “Sandy,” Bruce complies, and despite its unusual position in the set (it was typically an encore song in ‘75), the heartfelt version delivers a welcome mid-show change of scenery.

While a hint of vocal raspiness suggests Springsteen may not have started the show feeling 100 per cent, you’d never know it from the performance, which was escalating already and goes next-level following “Sandy.” Gorgeous organ, guitar and piano interplay start “Backstreets,” in a performance that evokes the Dylan lyric, “bathed in a stream of pure heat.” There’s no denying the versions of the song performed in ‘77 and ‘78, but this is a tremendous 1975 “Backstreets.”

After wrapping themselves in glory all night, the band steps into the spotlight for “Kitty’s Back.” The small venue and the recording quality combine to reveal gorgeous musical details: every subtle click sound of Danny’s organ keys; Garry Tallent paying homage to Donald “Duck” Dunn; Roy Bittan weaving in the melody of “Fever” (the one made famous by Peggy Lee). Listen around 15:45 for a rare isolated backing vocal by the Professor after Clarence Clemons switches back to sax. Such a treat.

The last song in the set from Born to Run is “Jungleland,” and we’re granted another exquisite reading, highlighted by Stevie Van Zandt’s redolent guitar solo and Danny’s delicate and doleful organ that flows out of the Clemons’ roaring solo. Phantom Dan and the Big Man ultimately yield to Bittan’s stately piano, upon which Springsteen leans into his vocal rasp, spurring some beautiful rephrasing of the song’s fifth verse, notably the line “refusal and then surrender.”

A storming “Rosalita” wraps the main set and leads to chants of “WE WANT MORE” from the newly converted. Who can blame them?

Yet instead of reaching for a standard BTR-tour encore, Bruce opts for a striking and revealing cover. “This is a Carole King song. It was done on one of the early Byrds albums…which is my favorite LA band, I guess….Also Nils Lofgren did a nice job with the song on his last album.”

Goffin and King’s “Goin’ Back” captures the yearning for lost innocence, and given what was going on in Springsteen’s career at the time, the song seems a fitting reflection of his thoughts and feelings in gorgeous, romanticized ballad form. Springsteen debuted “Goin’ Back” with King herself in the audience at the first Roxy show, but he never played the song again after performing it at all five shows in this stand.

Ten years later, standing on the precipice of another major career milestone, Bruce stuck a kindred note with his one-off performance of Brian Wilson’s “When I Grow Up (To Be a Man)” at Slane Castle ‘85, also never played in concert again. We’re lucky such a fleeting moment of emotional transparency is captured so beautifully by this recording.

Earlier in the show, microphones pick up someone shouting that it is Chuck Berry’s birthday, which no doubt prompts the appearance of a rowdy and raucous “Carol” to close the encore and a marvelous set.

The Born to Run tour is well documented by Hammersmith Odeon London ‘75 and Tower Theater 12/31/75. But more than 30 years after the inclusion of a single track on Live/1975-85, Roxy ‘75 gives us all the magic in the night that “Thunder Road” hinted at and our most intimate opportunity to date to hear, in the words of King, “the world the way it used to be.” I am intrigued by this one.  While I tend to gravitate towards shows with great crowds (really hoping for a Milan Rising release), having a show in a small venue filled with an audience who are largely unfamiliar with his music seems like a worthy effort.

Intriguing one. I had hoped for soemthing really spectacular doe the December release

Looking forward to hearing this one.  Is this the late show or the early show?

I've been waiting for this one since the Archive series was announced since it's such an obvious choice. Now if we can only get the other obvious choices: Winterland, Vietnam Vets, LA 1985. And I find it hard to believe that Chas Gerber didn't throw on a tape in Boston in March 1977, since it was the finale of the tour.

Looking forward to hearing this one.  Is this the late show or the early show?

Great show,  great sound.  One of the best releases so far.

Sign In To Reply
Post
Manage Topic
rollingstone.com article - The Last Word: Steven Van Zandt on the Death of Rock and the Biggest Mistake He Ever Made
6 hours ago

MLB's 2020 season is almost upon us, Spring training has started. All fans r United in...
2 days ago

News for all the 'Pressed Silver' Collectors out there... re: the Springsteen Archives
2/1/208:30 PM

News for all the 'Pressed Silver' Collectors out there... re: the Springsteen Archives
2/1/208:20 PM