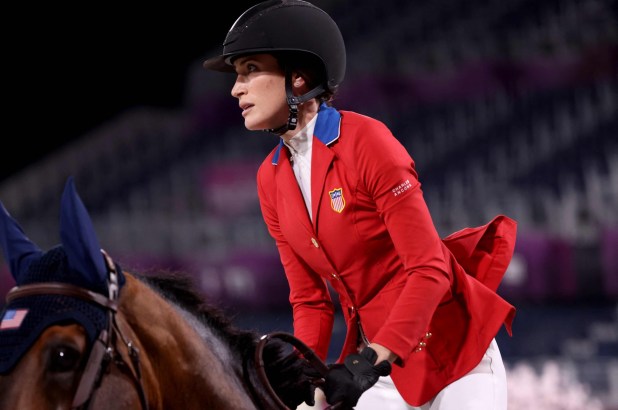 From today's the San Francisco Chronicle:

TOKYO — Maybe it’s a good thing there aren’t spectators allowed here. Or at least maybe it was a good thing on Tuesday, when the equestrian jumping qualifying took place.

Because if spectators, such as parents, were allowed, every other American athlete was at risk of being completely ignored by the nation’s media.

Because Jessica Springsteen was attempting to qualify for the finals. Yes, Springsteen is the daughter of that Springsteen.

And if her father, Bruce, and her mother, Patty Scialfa, had been allowed to be in attendance, American sportswriters might have flocked to the equestrian park in Kamiyoga.

Forget Simone Biles in the balance beam. Ignore all the track athletes at Olympic Stadium. Skip cycling and sport climbing and weightlifting. Sportswriters would have been trying to convince their editors that equestrian was the one event that really must be covered.

It’s not big secret, but American sportswriters love the Boss. I mean really, really, love the Boss. I’ve known some who plan their travel schedule around Springsteen’s concert tours. This is mostly, but not exclusively, a male phenomenon, but then, historically, sportswriting is mostly, but not exclusively, a male profession. But I’m part of the group: I’m a lifelong Springsteen fan, with concert attendance well in the double digits.

The sportswriter-Springsteen obsession is so real that that Deadspin wrote an entire column about it once. That was seven years ago, and a lot of the people who love Bruce have left the business, either by choice or because, well, newspapers.

But there are still enough of us old farts around who would get a thrill out of seeing Springsteen in the stands at something we cover, instead of us being in the stands to watch him. A few even would attempt to write stories completely out of Springsteen lyrics.

Surely, poor Jessica knows this. She’s 29 and has lived an existence of people trying to meet her dad or making “Born in the USA” jokes.

She has a shield. The U.S. equestrian public-relations staff reportedly screened questions earlier in the week and warned no one to ask her a question about her family after Tuesday’s competition. Jessica’s appearance in the mixed zone was brief. Kevin Durant and Biles might be here, but there’s no fame like rock-star-daughter fame.

Ann Killion is a columnist for The San Francisco Chronicle.

Silver Medal in the Team Competition.

Ditto that!  Just making the U.S. Olympic team is a great accomplishment.  It's probably the first of many such appearances for Jessica.  You go Girl!!!

A Warm Welcome to the Folks from Backstreets seeking a new home!
5 hours ago

Tampa House Of Guitars Video?? Anyone?? I need one.
6 hours ago

Why has the album box set reissue campaign stopped?
13 hours ago

George Washington- Is in the house....
20 hours ago
Bye Bye Backstreets
23 hours ago
Official download from opening night 2023 in Tampa is now available
23 hours ago

We're sorry. You must be signed in to continue. Sign In or Register
×