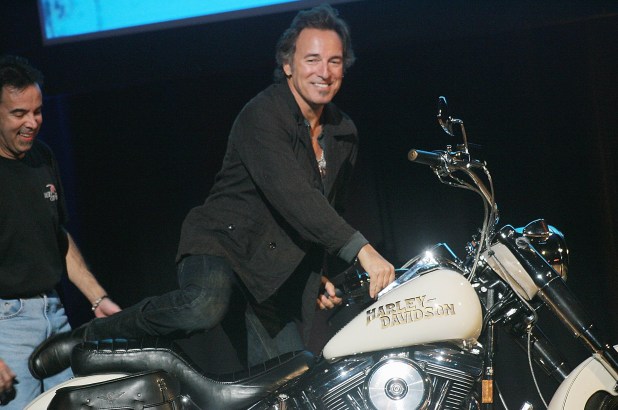 Bruce Springsteen on another motorcycle about to be put up for auction for charity.AP

We’ve got it covered: How Springsteen’s DWI bust may grace The Post’s front page

Bruce Springsteen was allegedly busted in Sandy Hook, New Jersey when he pulled over to take pictures with fans — and then took a shot of tequila offered by one of them in full view of the cops, a music industry insider said.

The “Born to Run” icon, 71, had been riding his motorcycle on the peninsula on Nov. 14 when he “was spotted by fans who asked him to pull over and take some pictures,” according to a source close to Springsteen.

“Bruce stopped, took the pictures, then a fan offered him a shot of liquor, which he took, while sitting on his bike, which was stationary,” the source said.

“Park Police saw what happened and they immediately pulled Springsteen over as he drove away.”

Springsteen was charged with DWI, reckless driving and consuming alcohol in a closed area, a spokesperson for the National Park Service said.

The Asbury Park Press reported Springsteen’s blood-alcohol content was 0.02 — just a quarter of New Jersey’s legal limit — when he was arrested.

The legal threshold in New Jersey is .08, which the outlet said calls into question why Springsteen was charged with driving while intoxicated.

News of the bust broke just days after Springsteen appeared in and narrated a Super Bowl spot for Jeep, in which he implored Americans to move toward the political “middle” in the spirit of unity amid recent bitter division.

The ad has since been yanked from Jeep’s YouTube page.

Retaliation for his political views?

These tix probably issued by some young Trumper cop who likes to issue tickets & despises Bruce's politics. I predict he will wind up pleading guilty to some BS (no pun intended) charge like drinking in a restricted area. How can it be reckless driving if the cop didn't see him do anything, plus no field sobriety tests? Someone said may be a Federal Magistrate, not local town court since Fed land. Even so, the prosecutor will look at this and say, I am not taking this losing case to trial. Will drop the DUI charge. There are lawyers who do DUI cases every day and are well versed & Bruce can afford the best.

not the most reliable news source, of course, but an article nonetheless

But remember, these favorable facts were probably leaked by Bruce's camp to these papers. Cop(s) may dispute it, who knows, may say he popped a wheelie and sped off after drinking. But a lot of witnesses.

Link to AD AGE story about how the New York Post chose to hype the arrest:

I can’t find the link at the moment, but FOX news (US) has a story about the charge filed and Springsteen’s alleged defiant and drunk behavior that required the officer’s heroic response.     It’s worth looking up.
The only omissions he seems to have made, are accusations that Springsteen took a 4 year old girl as a hostage, stole a thick crust cheese pizza, and attempted fornication with a sea mollusk by inappropriate use of his toenails.
unreal.

Q2Stolen Car
Here is the link to the Fox News report:
https://www.foxnews.com/entert...elt-strongly-alcohol

The "Born in the U.S.A." singer was arrested for DWI, reckless driving and consuming alcohol in a closed area months ago while at the Gateway National Recreation Area, a public affairs officer confirmed to Fox News.

Now, statements of probable cause obtained by Fox News show that "The Boss" allegedly refused to take a preliminary breath test when first approached by a park ranger on site.

"Springsteen refused to take a preliminary breath test (PBT), despite signs of intoxication namely after testing his gaze and walk and turn tests," a park ranger named R. L. Hayes alleges in the document. 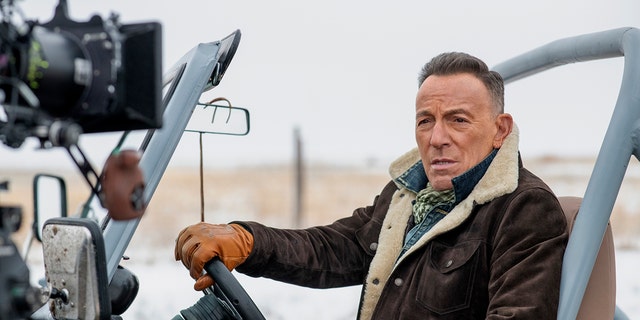 Bruce Springsteen's Jeep commercial that aired during the Super Bowl LV was removed from YouTube following the revelation of his DWI arrest. (Jeep)

Additionally, the ranger claimed to have observed the musician "consume a shot of Patron tequila" before getting on his motorcycle to "start the engine."

Hayes claims he informed Springsteen, a New Jersey native, that drinking on the park premises "is prohibited."

"The Patron bottle that the shot was poured out of was completely empty (750ml)," the ranger also writes. "I asked Springsteen if he was leaving and he confirmed that he was going to drive out of the park."

Hayes claimed Springsteen reeked of alcohol. "[He] smelt strongly of alcohol coming off his person and had glassy eyes," the report states.

The ranger continues that Springsteen "claimed that he had two shots of tequila in the last 20 minutes." 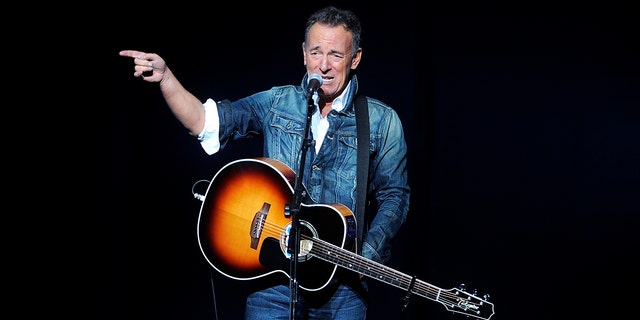 Bruce Springsteen was arrested back on Nov. 14, 2020 in his home state of New Jersey for three citations, including DWI. (AP)

The ranger also said he "observed four out of six clues on the horizontal gaze nystagmus test." The musician was "visibly swaying back and forth while I observed his eyes," Hayes said. "I observed five out of eight clues on the walk and turn test. Springsteen took 45 total steps during the walk and turn instead of the instructed 19. [He] refused to provide a sample on the preliminary breath test."

Springsteen is expected to appear in a virtual court hearing at the end of the month. The documents specify that the exact location of his arrest took place at a "lighthouse" in the park.

This stuff is so easy to make up, of course the Ranger is going to check as many boxes as possible to justify what he wanted to do in the first place. Interesting that the article says they obtained the report but they don't link to it. Witnesses? He observed an empty bottle, where? Is there a way to trace it to Bruce or was it someone else's, as per the report earlier that a fan gave him a shot. How is it reckless driving if he never saw him riding the bike? He obviously overcharged figuring the prosecutor will drop some charges or allow a plea to something lesser. People talk about the judge but what's going to matter here are the discussions between Bruce's lawyer and the prosecution, what deal they work out and then present it to the judge for approval. It ain't gonna be tried, that's for sure.  It's also irrelevant and won't make any difference that he first declined to be tested, in fact he did and he blew a low reading.

Regarding the Breath tests: Here is the law in NJ.:

Some police departments in New Jersey use what is called a Portable Breath Test, or PBT. The PBT produces a reading but the results are not admissible as proof of intoxication in a trial. ... [b]It is important to note that, in New Jersey, you are not required to take a portable breath test.[/b] *This also applies to Federal Law.

It's the same federally because a Portable Breath Testing Unit has never been scientifically proven to be accurate before a Supreme court of either a state or federally. So it's just another tool for an officer to use, such as his observations and use of his senses, eg: smell.

That being said, when arrested for DWI and brought into the Police Station to submit a breath sample into a breathalyzer machine, you are required to take the breathalyzer test. A refusal is an automatic 6 month loss of license, the same penalty as the DWI. In addition to the refusal you will be charged with the DWI and can be convicted of both offenses on the Officer's observations and other factors.

So if you refuse a breathalyzer test it's an automatic charge of refusal and a 6 month loss of license which I've never seen beaten in court.

The incident occurred on Federal land. Constitutionally, Federal laws supersede state and local laws in almost every instance. Bruce was not cited nor turned over to any state or city authority, so whatever the variances between city or state application of the law, they are irrelevant  to Federal jurisdiction and the actions of a Federal park ranger.

That being said, I should state that I have no law degree nor do I play a lawyer on TV.

You are required to take the breathalyzer but can't be compelled to take it, they can't hold you down and make you, we agree, refusal to take it adds to your suspension time if you are convicted. And as you say you can still be convicted on the officer's observations. As people were in olden days and can be convicted for pot intoxication, for example. Reckless is a heavy lift, it requires almost intentional conduct as opposed to careless which is driving w/out due care in a manner that endgangers people or property.

And an interesting side note, even though this is Federal land, at least the reckless is a state charge. There are no Federal ordinary driving statutes. Under an Act of Congress: " if a criminal offense under state law is committed on federal land, and there is no chargeable federal criminal offense, federal law enforcement and federal prosecutors are authorized to charge offenders in federal court for a state law violation. " One of the most common is DUI, but: "Whether DWI/DUI is charged under [state] law or under the federal DUI regulation will depend on whether the property is operated by the National Park Service. A federal DUI charge is a class B misdemeanor...." Ok, this is already getting too complicated, seems Sandy Hook is a National Park. But the proof needed should be the same.

Yes, to sum it up they go to the State law for MV offenses.