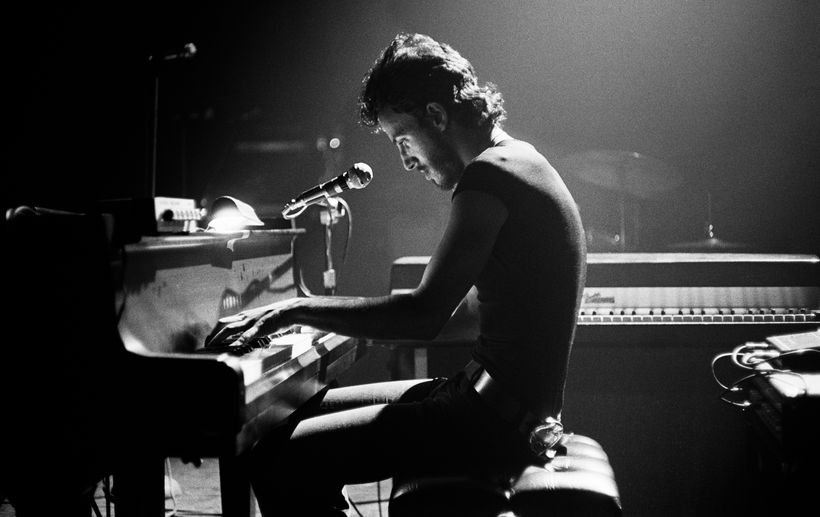 Bruce Springsteen at the Harvard Square Theatre in 1974.(BARRY SCHNEIER)

One weekday evening in April 1974, Barry Schneier went out to see some rock ’n’ roll in Harvard Square.

Schneier, then in his 20s, spent a lot of nights in those days checking out the local music scene. While growing up in Newton during the 1960s, he’d played in a high school band that landed a few gigs at Surf Nantasket. He’d recently graduated from Emerson College with a degree in filmmaking, and he often brought his cameras to the shows.

Schneier’s downstairs neighbor had just brought home a copy of an album by an unheralded newcomer from New Jersey named Bruce Springsteen. The album had an unwieldy title — “The Wild, the Innocent & the E Street Shuffle” — and a similarly rowdy mix of horns, guitars, and words. Schneier was intrigued.

So he and a couple of friends headed over to Charlie’s Place, on Bow Street. When they got to the bar, they were startled by the enthusiastic turnout for an unknown from out of town.

Schneier asked one customer sitting in a booth: Why such a crowd? The guy gushed about Springsteen and his band. He was from Philadelphia, and he’d been traveling up and down the East Coast to catch every show.

“I remember thinking: Why the hell would anybody do that?” Schneier recalls with a laugh. A couple of songs into the set, he knew why.

One month later, Schneier saw Springsteen perform again, this time at the Harvard Square Theatre. That show would change his life, and not just in a figurative sense. It would change Springsteen’s life, too.

The photos Schneier took that night were really good. He printed a few of them and added them to his portfolio. Then he moved out West.

He got married. He and his wife, Marty, had three boys. They moved back East, and Schneier started a long career in corporate video and event production. And the portfolio got jammed beneath a stack of papers in his cramped office on the ground floor of their split-level home in Holliston.

By then, the 35mm cameras that once accompanied him everywhere he went were consigned to “taking pictures of kids at soccer games,” Schneier says.

Eventually his sons, now grown, became aware of the rock ’n’ roll pictures. You should do something with these, they told their father. Besides a young Springsteen, he had intimate black-and-white shots of Van Morrison and Jackson Browne and Patti Smith, taken from the wings of Boston-area stages.

Some years ago, the Globe ran a photo contest called “Your Best Shot.” Taking his sons’ advice, Schneier sent in a picture of the 24-year-old Springsteen sitting at the piano. It’s a gorgeous shot — this shaggy, wiry, intensely focused Springsteen character, his back curved as he hunches over the keyboard. His lips are pursed in concentration, and there’s a faint glow from a small lamp fixed above his hands.

Schneier felt pretty good about his chances. When he had taken the picture, he’d been packing up his cameras, sitting on a drum case. As E Street pianist David Sancious left his bench, Schneier had thought maybe the band was through for the night. But when Springsteen sat down and began playing a slowed-down, contemplative version of “For You,” from his debut album, “Greetings From Asbury Park, N.J.,” Schneier had scrambled to get a few more shots.

He won the contest; no surprise there. It’s what happened next that rocked Barry Schneier’s world.

The photo caught the eager attention of Chris Phillips, the editor and publisher of Backstreets, a long-running Springsteen fan site. Springsteen, of course, has never been far from the public eye since the breakthrough of his classic “Born to Run” album in 1975. But photos of him performing in his early years, still in obscurity, are exceedingly rare.

Phillips asked to publish several of Schneier’s photographs from that night in Harvard Square. After Backstreets ran the photos, Springsteen fans lined up to order prints. Prestigious institutions such as the Grammy Museum and the Rock and Roll Hall of Fame began inviting Schneier to participate in group photography exhibitions. And he started bringing his cameras to concerts again.

At one point, while driving into Boston for a night out, his wife asked if he wanted to devote his time to this resurgent photography thing.

“Then keep at it,” Marty replied.

A decade or so after he dusted off his old prints and contact sheets, Backstreets has just published a deluxe collectible book of Schneier’s Springsteen photos. Phillips and Schneier launched a Kickstarter for the project, hoping to raise $32,000 to cover the cost of printing a limited edition of 500 books. Supporters ended up pledging more than $100,000 — enough for 3,000 copies. The names of all 1,001 backers appear in the back of the book, which hasn’t quite sold out yet.

In her foreword, Eileen Chapman, director of the Bruce Springsteen Archives and Center for American Music at Monmouth University in New Jersey, reminds us of Springsteen’s habit of calling for “a witness” when he’s onstage.

Schneier, she writes, “pulled duty as Bruce’s reliable witness” when he captured the performance — one that would turn out to leave a rather large mark on the timeline of American popular music history.

The book’s title, “Bruce Springsteen: Rock and Roll Future,” comes from the other significant thing about that Cambridge show, 45 years ago.

It may not have happened at all were it not for Schneier. After seeing Springsteen at Charlie’s Place, he implored his friend Ira Gold — one of two partners in a local concert promotion company called Windowpane Productions — to consider booking this Springsteen fellow.

One month later, they brought Springsteen back to open for Bonnie Raitt at the Harvard Square Theatre. Because he was friends with the promoters, Schneier had full access to the band.

After the show, a critic for the Real Paper named Jon Landau wrote a line that still stands as the rock-music equivalent of Ralph Waldo Emerson’s legendary letter to Walt Whitman: “I greet you at the beginning of a great career.”

“I saw rock and roll future,” Landau wrote, “and its name is Bruce Springsteen.”

Schneier, meanwhile, made his move to California. The day before he left, he was at a show on the Esplanade when he bumped into an acquaintance, a skinny young guy named Steven Tallarico. Schneier mentioned his plans to move, and Tallarico — better known as Aerosmith’s Steven Tyler — offered a hearty sendoff on behalf of the Boston music scene.

Today, Schneier, 69, has a lot less hair than he did back then. Sitting in his living room, he gets up to turn off the stereo, which is playing a Tracy Chapman song. Willis, his Shih Tzu, clambers onto the sofa and curls up.

Since his entree into the Springsteen orbit, Schneier has traded original prints with fellow photographers. Across the living room, there’s an appropriately large print of Clarence Clemons, Springsteen’s late saxophonist. It’s signed by Danny Clinch, one of the true big-name rock ’n’ roll photographers.

Over Schneier’s shoulder hangs another framed print, this one by Pam Springsteen, Bruce’s sister. It captures the singer sitting at a table at home with a notepad, an acoustic guitar in his lap.

“He’s working on ‘The Ghost of Tom Joad,’ ” Schneier explains.

That’s one of Springsteen’s more haunted songs, but it does include a line that might apply to Schneier’s serendipitous life: With a few clicks of the shutter, more than half a lifetime ago, he ensured himself “a one-way ticket to the promised land.”