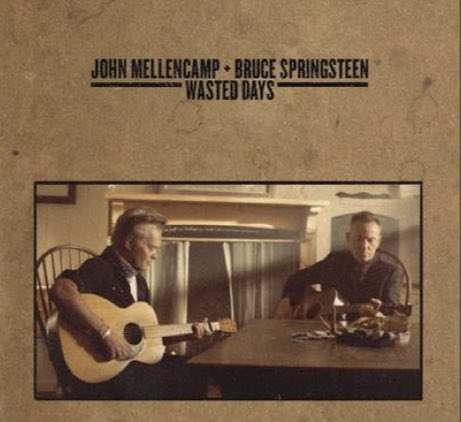 Song seems chipper (and must not be the most clear since they had trouble deciphering the lyrics):

{Verse 1: John Mellencamp}
{?}
How many minutes do we have left?

{Verse 2: Bruce Springsteen}
How much sorrow is there left to climb
How many promises are worth the time
And who on earth is worth our time
Is there a heart here that I can call mine?

{Verse 3: John Mellencamp & Bruce Springsteen}
How can a man watch his life go down the drain
How many moments has he lost today
{?}
The end is coming, it's almost here

Strange. Am still able to watch after refreshing. What do you see? It’s on John’s official YT channel.

Hmmm could be a Bruce solo in there. Anyone know?

You're right this sounds like it will get a lot of air time.

On a side note, I have a short story to tell you.  We've all heard the story that Bruce said he gives his all each and every night because it may be a fan's first time seeing both him and the band live and he strives to give that fan more than his money's worth... or words to that effect.

Well prior to the pandemic in 2019, Beth and I went to see John C. Mellencamp at the at Modell Performing Arts Center at the Lyric in Baltimore.  It was a sellout and he had an orchestra with him and band member were dressed quite formally.  Although I've enjoyed his music through the years, It was our first time seeing him.

The Lyric is an old time theater, meaning it's not that large.  You can pretty much hear someone talking throughout the entire theater.  It's about the third song and these ladies were requesting a song and letting John know how much they liked him.  Mind you this was between songs and may have ran over a few seconds into the into of 'Small Town'. John stopped playing and tore these two women a new arsehole.  He was visibly upset and in no uncertain terms told them to shut the F up.

It was totally uncalled for and it was obvious to all that these ladies adored him and he broke their hearts and embarrassed them to all or at least that's how I would have felt if I were them.  I'll never pay to see him again unless it's with our man, Bruce... just sayin.

Yeah and I know Bruce lost his cool and yelled at one of our own SPLrs during the D&D show in Jersey.  Bruce got yelled at by his mother  and Bruce at least apologized during the show.

Yeah not surprised, John certainly has the reputation of being a grumpy guy and is hard to be around some times. Self admitted too I recall...

...although there are some folks at shows who are ruining it for the rest of us that need a good tongue lashing or belt around the head

...although there are some folks at shows who are ruining it for the rest of us that need a good tongue lashing or belt around the head

True enough, and those that have gone to shows with me throughout the years have seen me in action with such persons.

This wasn't like that, it was so uncalled for... I felt sorry for the ladies, who by the way had a sign request that was never held up again.

Definitely has a more JCM sound (violin reminds me Cherry Bomb).  Not bad but not something I would normally listen to (too damned depressing as I get older).

…. So, what was the resolve to the ladies’ song request?  Did he end up playing Free Bird or not? 🧐

Look, it was Mellencamp. Life goes on, after the thrill of living is gone.  Ain’t that America? 🤪