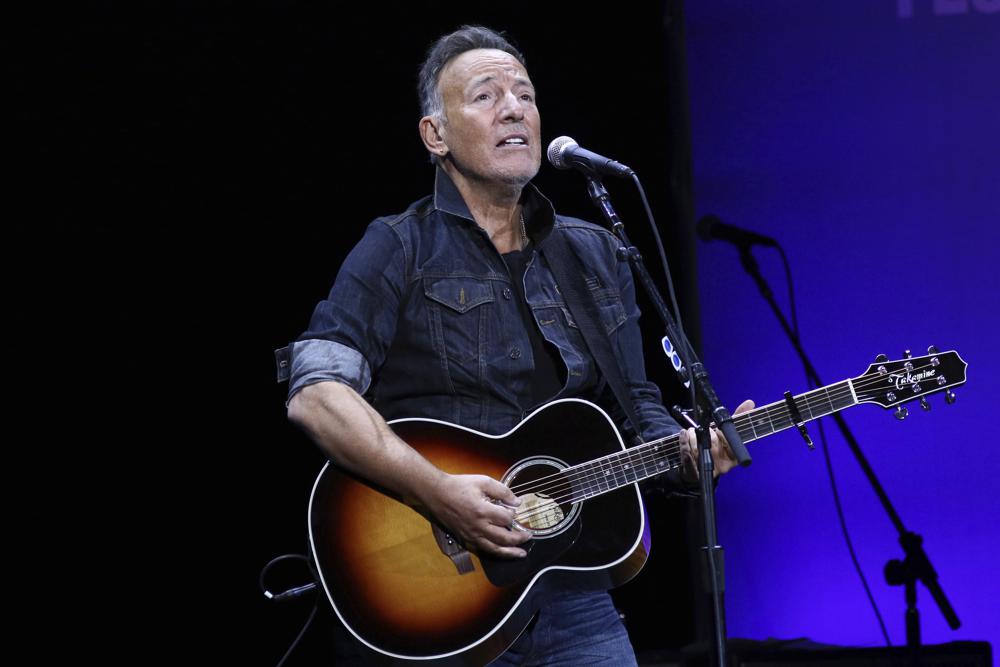 Bruce Springsteen performs at the 13th annual Stand Up For Heroes benefit concert in support of the Bob Woodruff Foundation in New York on Nov. 4, 2019. Despite Springsteen's long-time aversion to having his concerts filmed — he says it was a superstition — a new DVD offers a relatively rare look at him and his E Street Band during a peak period in the late 1970s. (Photo by Greg Allen/Invision/AP, File)


NEW YORK (AP) — If there’s one thing Bruce Springsteen’s fans can find fault with in their hero, it’s his early aversion to film cameras.

Because of that, there is very little onscreen documentation of Springsteen onstage in the mid- to late-1970s, when the power and majesty of the E Street Band combined with youthful exuberance for some truly epic concert experiences. Without a ticket and a good memory, they passed you by.

That makes this week’s release of a 90-minute film that shows them performing at the “No Nukes” benefit concerts in September 1979 significant for fans and music historians. It’s found money.

Before a friendly crowd at New York’s Madison Square Garden, Springsteen and his gang of Jersey toughs crackle with pent-up energy. They’d been off the road in 1979, recording “The River,” and are thrilled to be before an audience again. Their typical four-hour show was condensed into 90 minutes. Sharing a bill with artists like Jackson Browne, Graham Nash, and Bonnie Raitt, they burned to show peers what they could do.

Little wonder, then, to see them burst onto the stage with a roaring version of “Prove it All Night.” That’s exactly what they intended to do.

When filmmaker Thom Zimny first reviewed the footage, it was without sound, and he could still tell something special was happening.

“You see them explode onscreen,” he said. “The sheer force of E Street at this point was amazing to see.”

Springsteen explains that superstition led him to keep cameras away in those days, something about a musician not wanting to look too closely at his bag of tricks.

It’s different now; all of Springsteen’s shows are filmed. Back in 1979, the “No Nukes” concert escaped the film phobia because a crew was on hand to make a documentary on the benefit for alternatives to nuclear energy.

There actually wasn’t much incentive for filming shows in the pre-MTV, pre-YouTube days, said Chris Phillips, editor and publisher of Backstreets, the website for Springsteen news, With no real outlet on television or the movies, “you were just playing rock ‘n’ roll,” he said.

As a result, footage of more than snippets of Springsteen onstage then are relatively rare, he said. One show in Phoenix turns up on YouTube, recorded by his record company for a commercial to promote Springsteen in parts of the country where he wasn’t well known yet. Portions of a Houston show, taken for an arena’s in-house use, survive. So does a recording Springsteen’s first show in London, at the Hammersmith Odeon in 1975.

A couple of Springsteen’s performances appeared on the “No Nukes” documentary and album. Mostly, the footage remained locked away in a vault until Zimny was given access.

He turned it into the film that is being released now partly as a pandemic project.

“It was something that I did because I missed the band so much,” Zimny said.

Unlike much of the surviving footage of Springsteen from those days, Zimny was working with quality film, shot by a crew that could provide multiple angles. Still, there are imperfections: images of Steve Van Zandt’s solo on “Jungleland” are missing, perhaps because they were reloading cameras.

Zimny kept to the running list of the shows, held on back-to-back nights (including Springsteen’s 30th birthday), and including some different encores — the “Detroit medley” of covers one night, a performance of Buddy Holly’s “Rave On” another. The shows included sneak peeks of “Sherry Darling” from “The River” and the upcoming album’s title cut, and a duet with Browne on “Stay.”

Rabid fans were always aware this footage had to exist, somewhere, Phillips said. Its emergence is a treat for the Backstreets editor, too: He didn’t see Springsteen live until the “Born in the USA” tour five years later.

“After waiting 40 years for this, it does not disappoint,” he said. “It’s an amazing thing, with tempos that are off the charts.”

That’s evident when they play “Born to Run.” Decades into the song’s existence, its appearance in concert is now a karaoke-like ritual — the lights go up, everyone sings along. It was still a relatively new song in 1979, and the band attacks it on “No Nukes” with a double-time ferocity.

The film also illustrates how vital Clarence Clemons was to the show: catch how he and Springsteen make eye contact during “Rosalita,” launching an extended choreography. Springsteen leans on him, literally and figuratively. With Clemons and organist Danny Federici now dead, the band’s not the same.

The “No Nukes” film is on sale as a DVD or Blu-Ray disc, in separate packages with audio CDs of the music. The film won’t be available on streaming services until next year; audio is available for streaming on Friday.

Zimny described how Springsteen, now 72, was juiced when he was first shown the concert footage, and quickly sang along with his 30-year-old self on the screen.

“We were young, we were kids,” Springsteen said at a public screening last week in New Jersey. “What the film is packed with is youthful energy at a level that was surprising even to me when I saw it. It’s a great document of the band at a very, very specific moment.”

This story has been corrected to say that the film won’t be on streaming services until next year, but audio streaming will be available later this week.

Tour deatils coming tomorrow on bs.net according to Bruce
4 hours ago