Saturday evening, the second night of the best concert weekend ever.

I borrow a quote from the Backstreets report of that evening, talking about concert visits: "Only in very few cases — if ever — you know you have been witnessing something that can't be described in words. ... Ullevi tonight was one of those nights."

Another quote from the same report: “...a show which not only can be described as the best of this tour by a good distance, the best of the decade ..., and possibly, just possibly, the best one ever. I'm sure such a statement is up for grabs, but there's no doubt this is a strong contender.“

The emotional highlight of the evening was clearly the first Jungleland without C but with Jake. Jake later said in an interview, that this was the most emotional moment of his life. He said, from that point on he felt to be a member of the band, not just standing in for his uncle anymore. During the sax solo there were not many people in the first rows without a tear on their cheek...

I still remember the next morning sitting at the Gothenburg airport, waiting for the flight back home. At least half of the people at the airport were at these two concerts, you could see it because of their T-Shirts or pit wrist bands. I will never forget the mood at that airport. All these concert goers were sitting around, grinning silently at each other, still trying to realize, what they have witnessed on these two evenings in Gothenburg. Everybody new, that this was big but we couldn't believe how big.

I still try to understand five ten years later and I'm still so thankful to have been able to participate such a magic concert weekend. After so many great concerts over all those years, during that weekend all my teen dreams and much more came true. My personal "holy grail" of concerts.

July 28 / Ullevi Stadium / Gothenburg, SWEDEN
In most cases, reporting on a Bruce Springsteen concert is a rewarding experience. You get the opportunity to share a great live experience with a fan community, describing the night's performance and particular highlights. Only in very few cases — if ever — you know you have been witnessing something that can't be described in words. Then, the job gets a bit trickier. Ullevi tonight was one of those nights.

After Bruce and the band delivered a solid show yesterday, aimed to please a record-breaking 66,000-plus audience, hopes were high for a second show to be just as good but very different, as with the two-night stand in Bergen earlier this week. Well, we did get a different show: 19 songs not played the night before, and several tour premieres... and we got a lot more. 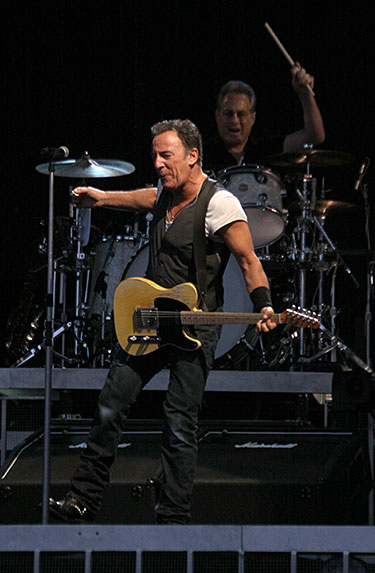 From the very beginning, Bruce seemed to be full of confidence following Friday night's show, which won rave reviews in all the newspapers. Entering the stage in a white T-shirt and a black vest, he opened with the full-band redention of "Who'll Stop the Rain" (Gothenburg had heavy rain all day, tapering off just about an hour before the concert). "The Ties That Bind" followed, sounding tight despite being infrequently played, Jake sounding as good as the Big Man himself at his prime. A "Born in the U.S.A. double-header," in Bruce's words, brought us "Downbound Train" and "I'm Goin' Down," with Jake really shining once again. The first sign request of the evening — "We haven't played this in quite a while, but due to the weather conditions..." — was the tour premiere of "Lost in the Flood."While both Bruce and Roy needed a bit of brushing up before the song could start, once it got going we got a stellar performance of this song, which ever since the reunion tour retention has been a fan favorite whenever it is played. During a particularly emotional "My City of Ruins" the "we are not worthy" waving from the crowd toward the side of the stage previously occupied by the Big Man was particularly heavy — indeed a sign for things to come later in the evening. 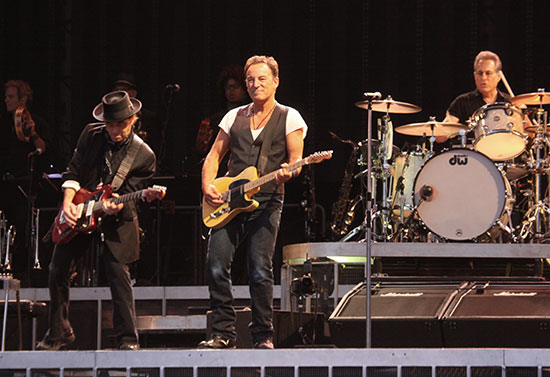 A sign request brought "Saint in the City": "A lucky song. I got my record contract playing this one," Bruce introduced it, going on to deliver hot guitar solos with Steve during an extended coda. Introduced as a song from The River album, out came the tour premiere of "Frankie." The introduction with Nils on 12-string supported by Soozie on fiddle was new, adding a country flavor to this one, which Bruce called "a beautiful song" (despite seemingly missing the fact that this was recorded for both Darkness and Born in the U.S.A., the latter version released on Tracks). Also new was Bruce's guitar solo (in place of the sax solo) toward the end of the song. 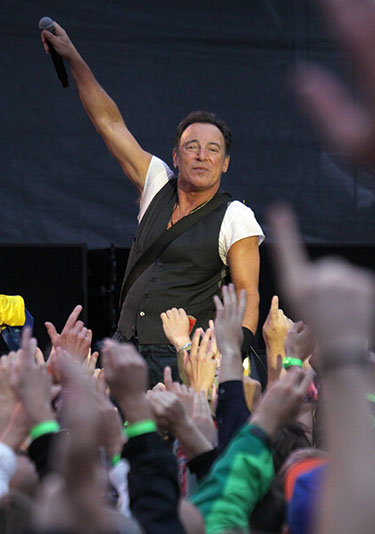 To please the crowd, no fewer than three sing-along staples in a row ensured that causal fans got their money worth: "Hungry Heart," "Shackled and Drawn," and "Waitin' on a Sunny Day." As a special thank you to fans who have been "following us from place to place to place to place..." we got the tour premiere of "Where the Bands Are," with Bruce playing the first verse alone before the full band kicking in. But he clearly wasn't finished expressing his gratitutde: up next was a truly masterful performance of "Backstreets," delivered with a lengthy interlude (not as long as the much-loved '78 version, but close), with Bruce repeating "til the end" and "come a little closer" before taking on the "hiding on the backstreets" part. The best performance of this song I've seen since the Darkness tour period. If some Swedish authority had decided to the plug there and then, this would have been the best show of the tour, but Bruce and the band were far from done.

Closing out the main set was a hot version of "Badlands" and an epic "Land of Hope and Dreams." Kicking off the encore, we got a crystal-clear "Thunder Road" delivered with incredible passion and determination, getting us to believe that we really were gonna pull out of this town and win. Following an earth-shaking "Born in the U.S.A." and "Born to Run," we got some pure fun through "Ramrod." By the end of "Dancing in the Dark," Bruce signaled that his voice was gone — which was partially true, already having shown some signs of wear and tear yesterday — but as usual, Steve got him on his feet again after a few liters of water from the sponge.

When we thought this could be all over after the tribute that is "Tenth Avenue Freeze-out," Bruce wasn't done talking about the Big Man. He noted that "Clarence always had a special connection to Sweden," and then: "We haven't rehearsed this, but this is for you and for the Big Man." What followed was the tour premiere of "Jungleland." With Soozie moving back a little bit, a spotlight fell on a lonely saxophone placed at Clarence's usual stage position, and we got an extremely moving redention of his signature tune. To say that Jake was up to the task would be a severe understatement. Following the song, Bruce and Jake embraced, and tears were not only in Jake's eyes, but in everyody's. Clearly one for the history books of the E Street Band.

Having thanked the Swedish audience for "two amazing nights" and an "Oh my God" seldom heard from Bruce on stage, he said that "We need to send these people home!" But not before the stadium-breaker anthem "Twist and Shout," with the La Bamba part thrown in for good measure making it the longest version of the song since the Amnesty tour. After that it really was the end to a show which not only can be described as the best of this tour by a good distance, the best of the decade (yes, St. Louis 2008 has served us well so far), and possibly, just possibly, the best one ever. I'm sure such a statement is up for grabs, but there's no doubt this is a strong contender.
- Ivar Noer reporting - photographs by Riku Olkkonen

Agreed, it was a special night.

Just checked back what I wrote in my blog about it and these are the first lines:

"At my hotel after this second show at Ullevi stadium I looked back at what I had just witnessed and knew I had been part of something special. I may have felt the need for a new pair of feet and I certainly longed for dry clothes, but nothing could have spoiled that experience. I knew I had seen of the best Springsteen shows ever, possibly the best. After all these years and all these shows, Bruce still has the power to render me speechless!"

Agreed, it was a special night.

Just checked back what I wrote in my blog about it and these are the first lines:

"At my hotel after this second show at Ullevi stadium I looked back at what I had just witnessed and knew I had been part of something special. I may have felt the need for a new pair of feet and I certainly longed for dry clothes, but nothing could have spoiled that experience. I knew I had seen of the best Springsteen shows ever, possibly the best. After all these years and all these shows, Bruce still has the power to render me speechless!"

You know what's so great about Bruce's shows.  You have the chance to feel like this every night.  You just don't know which show will move on from excellent to great.  I'm guessing I've been to 15 shows where I've thought the same thing. Then the following year he goes out and does it again only better.  After the show, I'll look at Ed, Ed will look at Peter, Peter will look at Frank, Frank will look at Ivan, Ivan will look at Tara, Tara will look at Hobie and we will all have that amazed look on our faces.  Damn it , he's gone and done it again.  I'm not sure we should count Tara cuz she always looks at Hobie like that.

Anyway, you know what I mean.

It's 10 years ago today. I still think this was the highlight of my 140+ (not only Bruce) concerts!

Yeah, it was really a great show, but four years earlier in 2008, I saw DRIVE ALL NIGHT first time played in europe for 30+ years or so at the same venue at my birthday with the BIG MAN on sax with tears in his eyes, and this will always be the highlight for me in 70+ bruce-shows ...