Friday evening, the first evening of the best concert weekend ever.

It was not only the brilliant concerts in Gothenburg (see Backstreets report below), it was the whole mood in the city. Everybody in town new about the concerts, newspapers were full of it, record and book stores had their windows full with Springsteen material, every bar and restaurant played his songs.

One small story I experienced during the weekend: Several times we drove with the tram through town to the stadium. The tram passed on this way the hotel, where the band stayed. There was always a small crowd in front of the entrance waiting for band members. This time the tram stopped right in front of the entrance and we got a 30 second look on that crowd. After a while I looked to the quite old man, maybe 75 or 80 years old, sitting on the opposite place in the tram. He looked at me, pointed to the hotel and told me: "Springsteen".

I'm still so satisfied to had the chance being there second or third row at the small center stage. By far the best concert experience of 40+ Springsteen concerts since 1988 and 140+ concerts overall.

One of the many highlights of that evening:

July 27 / Ullevi Stadium / Gothenburg, SWEDEN
Having delivered four performances during the four-day stay in Norway, Springsteen and the band went to Sweden for a two-day rest before the two-night stand at Ullevi Stadium in Gothenburg. While Bruce may be something like the king of rock 'n' roll in Norway, he is simply God in Sweden. On the day of the concert, all of the nation's newspapers had front-cover stories about Bruce, giving exact times for when he left the hotel, when he went to the gym, and on and on. We learned that he took time out to check out Against Me! (with Jay Weinberg on drums) playing at a festival in town the night before. Sweden's appetite for Bruce and the E Street Band seems to be without boundaries, so when they took the stage at approximately 8:30 tonight, expectations were incredibly high. 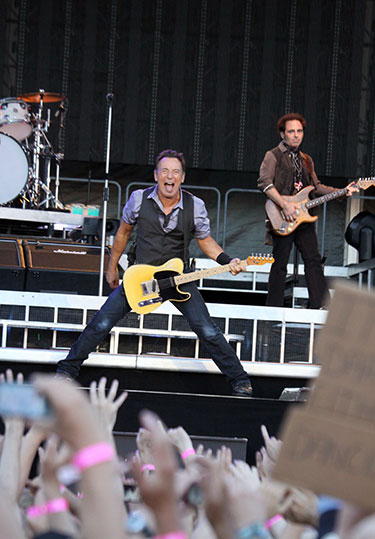 Walking onto the stage (now with intro music), Bruce skipped the acoustic opener and kicked right into a full band "The Promised Land," which has gained power after a deserved rest at many of the European shows. What seemed clear from the start was that Bruce was focused on delivering a real stadium show, taking into account that Ullevi, with a capacity of 65,000-plus, is almost triple the size of the Bergen venue of the previous two shows. Thus in Gothenburg there was less emphasis on requests and rarities; rather, the focus was on delivering a no-nonsense show that could grab the attention of the whole crowd rather than pleasing every die-hard fan.

Which is not to say there were no rarities. Following "Prove It All Night" (Steve taking the extended solo at the end) and "Cover Me," we got a very welcome "Something in the Night," which made for a Darkness-heavy opening stretch. Next up was "My Love Will Not Let You Down," which always gets the crowd going even though it has been played infrequently since the reunion tour. During "Spirit in the Night" Jake showed that he has now fully recovered from his back injury, joining Bruce once again at the lower stage during the final verse. Only one request was picked during the sign section, for the tour premiere of "Girls in Their Summer Clothes." Bruce noted that "we have actually practiced this," adding, more obviously, "This is for all the lovely Swedish girls." 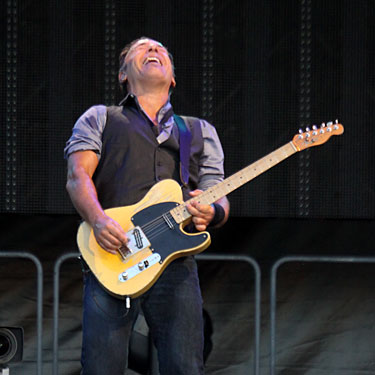 Having been rested throughout all the shows in Norway, "Jack of All Trades" was back in the set — it was a masterful performance, with beautiful solos from Curt and Nils and a strong vocal delivery from Bruce. Too bad many in the audience used this as an opportunity to get a beer, which often happens during shows of this size. After a quadruple depression section starting with "Jack of All Trades" and ending with "Johnny 99," the mood radically changed with a heavy focus on crowd pleasers such as Born in the U.S.A. staples "Working on the Highway" and "Darlington County." While "Waitin' on a Sunny Day" is most likely the hardcore fans' number one candidate for a deserved setlist rest, it is indeed facinating to see 65,000 people joining in on this one. Tonight Bruce was even extending both the beginning and the ending of this song, which received one of the loudest cheers of the night. 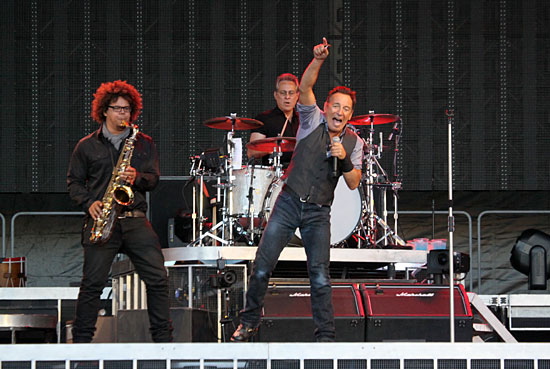 Speaking of die-hards, Bruce ensured these were not ignored delivering tonight's highlight, the tour premiere of "Drive All Night" (with an introduction of "this one's especially for you," which always triggers high expectations). Also played during the last Ullevi show (July 5, 2008) as noted by Bruce, this saw Jake Clemons delivering two simply amazing sax solos, which prove exactly why he is part of this tour and deserves to stay here for the long haul. 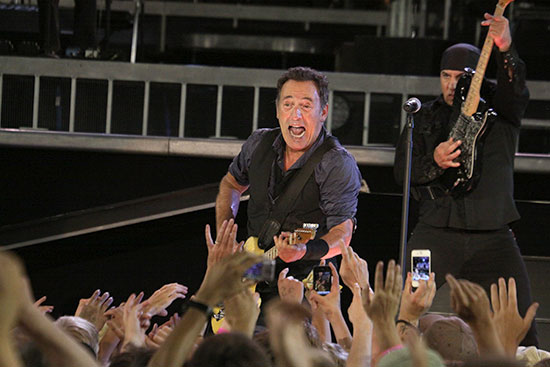 During the intro to "We Are Alive," Bruce noted that one newspaper had a feature on his clothes from all eras of his career — what he wore in '75, '85 and even these days — before heading into the usual graveyard story. To end a high-energy set of encores, he said what we all hoped for: "We can't leave without the stadium breaker, so let's test the stadium!" An extended "Twist and Shout" followed, bringing back memories of the concerts here on June 8 and 9 of 1985 — after those E Street Band shows, the stadium had to be closed for several years and be rebuilt due to the crowd's jumping en masse during the "Twist and Shout" show closer. I hope that the stadium is still in good shape after tonight, because I'm planning to be back tomorrow to watch the now "curfew-hating" E Street Band have another go at Ullevi.
- Ivar Noer reporting - photographs by Riku Olkkonen

Setlist:
The Promised Land
Prove It All Night
Cover Me
Something in the Night
My Love Will Not Let You Down
We Take Care of Our Own
Wrecking Ball
Death to My Hometown
My City of Ruins
Spirit in the Night
Girls in Their Summer Clothes
Jack of All Trades
Youngstown
Murder Incorporated
Johnny 99
Working on the Highway
Darlington County
Shackled and Drawn
Waitin' on a Sunny Day
Drive All Night
The Rising
Radio Nowhere
Badlands
* * *
We Are Alive
Born in the U.S.A.
Born to Run
Rosalita
Seven Nights to Rock
Dancing in the Dark
Tenth Avenue Freeze-out
Twist and Shout

It's 10 years ago today. I still think very often back to this weekend. Glory days!

Fabulous weekend, I can recall it very well. Had so much fun, not only during the shows ;-)