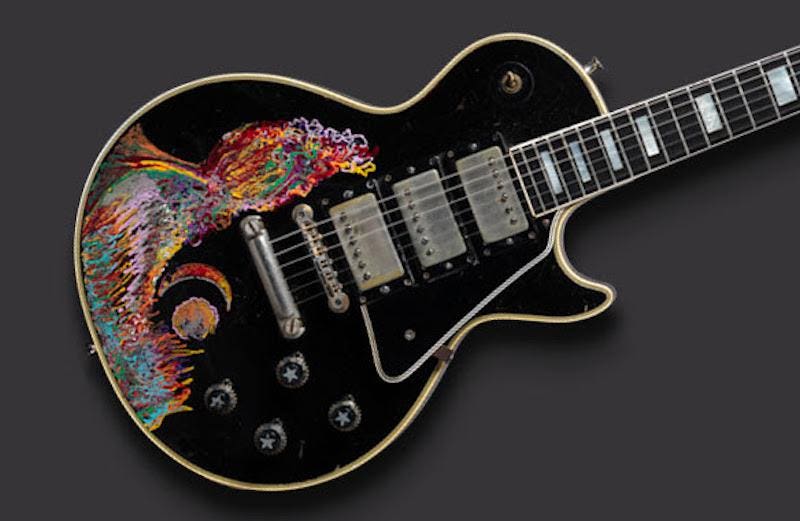 “It was always my belief that rock and roll belonged in the hands of the people, not rock stars,” said Patti Smith, singer-songwriter, poet, visual artist, and seminal pioneer in the New York City punk rock scene.

You won’t be able to get your hands on Jimi Hendrix's self-decorated electric guitar "Love Drops," Eric Clapton's "Blackie," Eddie Van Halen's "Frankenstein," Jerry Garcia's "Wolf," Joan Jett's "Melody Maker," or Keith Moon's "Pictures of Lily" drum set, but you can view these legendary instruments at The Metropolitan Museum of Art between April 8 and Oct. 1.

The Met was founded on April 13, 1870, "to be located in the City of New York, for the purpose of establishing and maintaining in said city a Museum and library of art, of encouraging and developing the study of the fine arts, and the application of arts to manufacture and practical life, of advancing the general knowledge of kindred subjects, and, to that end, of furnishing popular instruction."

“Play It Loud: Instruments of Rock & Roll”, at The Met Fifth Avenue, turns up the volume on the museum’s promise to promote “new ideas and unexpected connections across time and across cultures.”

The first major exhibition in an art museum dedicated entirely to rock and roll instruments features more than 130 instruments dating from 1939 to 2017.

Organized thematically, “Play It Loud” takes a deep dive into how musicians embraced and advanced emerging technologies, the phenomenon of "guitar gods," the crafting of a visual identity through the use of instruments, and the destruction of instruments in live performances as a trademark of rock's attitude and culture. The Met will display several rigs used in live performances and sound recordings, and demonstrate how artists created their own unique and earthshattering influential sounds. Also on view will be some 40 vintage posters, costumes, and performance videos to illustrate the musical movement's visual style and impact. Many of the performers are also visual artists, as the two passions often merge in the rock world.

"Instruments are some of the most personal objects connected to musicians, but as audience members we are primarily used to seeing them from far away, up on a stage in performance,” said Jayson Kerr Dobney, Frederick P. Rose Curator in Charge of the Department of Musical Instruments.

“Play It Loud celebrates a formative chapter in 20th-century art and culture, and the extraordinary objects featured in this presentation convey the innovation, experimentation, passion, and rebellion at the heart of rock and roll," said Max Hollein, Director of the Met.

The exhibition is supported by the John Pritzker Family Fund, the Estate of Ralph L. Riehle, the William Randolph Hearst Foundation, Diane Carol Brandt, the Paul L. Wattis Foundation, Kenneth and Anna Zankel, and the National Endowment for the Arts. It is organized by The Met and the Rock & Roll Hall of Fame.

Among the highlights are: Berry's electric guitar ES-350T (1957), which was his primary guitar from 1957 until about 1963 and was used to record "Johnny B. Goode"; James Jamerson's upright bass, which he likely used on many early Motown Records hits in the 1960s and early 1970s; Emerson, Lake & Palmer founding member Keith Emerson's keyboard rig, consisting of the customized Moog Modular Synthesizer, electric tone-wheel organ, and rotary speakers; a reconstructed performance rig from Van Halen as it appeared onstage in 1978; Lady Gaga's custom-designed piano, which she played in her performance of ARTPOP on The Tonight Show with Jimmy Fallon in 2014; Miller's electric guitar painted with psychedelic designs by artist Bob Cantrell in 1973; Weymouth's "headless" Steinberger bass guitar used extensively with Talking Heads and Tom Tom Club through the late 1990s; Richards's guitar played when the Rolling Stones appeared on The Ed Sullivan Show in 1966 and later hand-painted by Richards himself; St. Vincent's electric guitar, which she designed in collaboration with Music Man in 2015; and Page's dragon-embroidered costume (Los Angeles, 1975), an elaborately hand-embroidered suit which took more than a year to complete. Page wore it during Led Zeppelin's live performances from 1975 to 1977.

“Play It Loud” will also present a sculpture made from the remains of one of Pete Townshend's electric guitars, smashed during a photo shoot with Annie Leibovitz that was published in Rolling Stone as "How to Launch Your Guitar in 17 Steps."

A fully illustrated catalogue was created with funding from The Andrew W. Mellon Foundation, The Met's Friends of Musical Instruments (The Amati, Nion McEvoy, and Joseph O. Tobin II.)

The Met owns one of the world's most diverse and important collections of musical instruments, with more than 5,000 examples from six continents.