Even though their musical genre and style are totally different, there are parallels in the rise of both careers.  For instance Taylor Swift had the same problem with owning her songs with her first management team just like Bruce did.  She too recognized the injustice at an early age and broke away from them.

A few years back I read an article on her that pointed out the steps she took during the rise of her career and I noticed more than just a couple of similarities.

Perhaps having only one child, my daughter, gave me an affinity or a preview into what Taylor writes about.  That's what makes her so popular with the young ladies, she identifies with them.  They want to be the girls in her songs or they are, just like we did with Bruce.  There's a reason he had so many more male fans at his shows.  That's who he resonated with.

Even though I don't listen to her music, not my generation, I admire her stances, tenacity and the choices she's made.  I see the broader similarities and parallels in their respective careers, at least to this point.

Here is what Bruce had to say about her a couple of years ago:

In a recent interview with Variety, Bruce Springsteen opens up about Taylor Swift as a songwriter and how he views her as an artist.

When asked about his autobiography and mentioning him taking his daughter Jessica to a Swift concert, here's what he had to say: 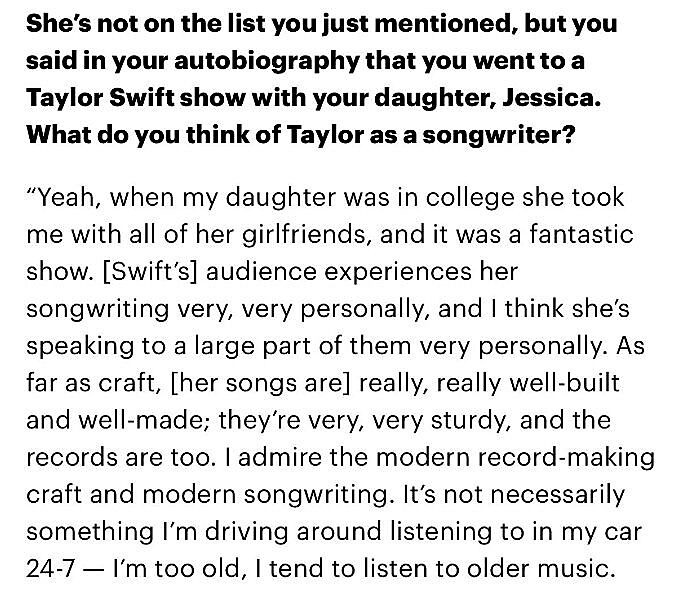 Here is another article that highlights some similarities even though that is not what the story is about.