An excerpt from Brian Hiatt’s new book, ‘Bruce Springsteen: The Stories Behind the Songs,’ tells the complex tale of ‘Born in the U.S.A’ 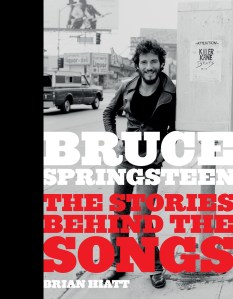 Bruce Springsteen: The Stories Behind the Songs, by Brian Hiatt, 2019

My new book, Bruce Springsteen: The Stories Behind the Songs, tells the tales behind every officially released studio recording of Bruce Springsteen’s career so far. In addition to my years of Springsteen reporting, including five interviews with the man himself, the book draws on over 60 hours of brand-new interviews with musicians, producers, and other collaborators from throughout his career (including Max Weinberg, Roy Bittan, Nils Lofgren, Soozie Tyrell, Tom Morello, David Sancious and many, many more). I’m proud to debut this exclusive excerpt here at Rolling Stone, where I’ve been on staff since 2004. Every song gets its own entry in the book; the one you’re about to read is for the title track of Springsteen’s 1984 album.

In 1968, Bruce Springsteen had every intention of dodging the draft. His efforts to convince a Newark, New Jersey, selective service board of his abject unsuitability for combat in Vietnam apparently extended to claiming he was both gay and tripping on LSD, but none of it was necessary. He flat-out failed his physical, thanks to a concussion he suffered in a nasty motorcycle accident the previous year. Springsteen was relieved – elated, even – but years later, he would admit to occasional pangs of guilt. “Sometimes,” Springsteen wrote in his memoir Born to Run, “I wondered who went in my place.”

Circa 1978, he read Born on the Fourth of July, Ron Kovic’s searing memoir of enlisting in the Marines as a blindly patriotic kid, only to come back from Vietnam paralyzed from the waist down and turn to antiwar activism. Soon after Springsteen picked up the book in an Arizona drugstore, Kovic himself happened to roll up to Springsteen by the pool at the Sunset Marquis in Los Angeles. They became friendly, and Kovic connected him with activist Bobby Muller, cofounder of the struggling Vietnam Veterans of America. Jon Landau helped arrange for Springsteen and the E Street Band to play an arena benefit concert for that organization in August 1981, with a group of veterans, many of them disabled, watching from places of honor on the side of the stage. It was a pivotal moment for the Vietnam veterans’ movement in the United States. “Without Bruce and that evening,” Muller said, according to Dave Marsh’s book Glory Days, “We would not have made it.”

When Springsteen returned home the next month and began writing the songs that ended up on Nebraska, he also started something called “Vietnam,” perhaps taking some light inspiration from Jimmy Cliff’s protest classic of the same name. Springsteen recorded a couple of boom-box demos of his tale of a returning veteran who is told everywhere he goes that he “died in Vietnam.” Some of the lyrics would reappear on the B-side “Shut Out the Light,” but one verse, with a factory manager claiming he would hire the narrator if it were up to him, would recur in brilliantly condensed form elsewhere. There is a repeated line about the veteran’s girlfriend running off with a rock ‘n’ roll singer (a hint of that survivor’s guilt?), and when he sings “the stranger is me,” it’s a reference to what would become one of Springsteen’s touchstones, the Stanley Brothers’ “Rank Stranger.”

On the oak writing table in his Colts Neck, New Jersey, house, Springsteen had a screenplay called Born in the U.S.A., sent his way by the film director Paul Schrader. Soon after writing “Vietnam,” Springsteen nicked the title of the script and began to transform the song. The first chorus he wrote rhymed “born in the U.S.A.” with a soon-to-be-discarded line sardonically saluting “the American way.” His reading of American history had recently included the 1979 book Sideshow: Kissinger, Nixon and the Destruction of Cambodia (a paperback copy shows up in photographer Frank Stefanko’s 1982 shots of Springsteen’s house), and one draft of the new song feels like private venting over what he learned. After marveling that Nixon never spent a day in prison, Springsteen suggests an alternative punishment: They should have “cut off his balls,” he sings (really). This draft also makes clear, in case anyone ever really doubted it, that the reference to being sent off to fight “the yellow man” in the final song was intended as an antiracist statement. They wouldn’t treat “the white man that way,” he sings, while musing over what it felt like to be Cambodian and witness the horror of bombs “falling like rain.” Other drafts show how skilled Springsteen had become at editing and compression; we learn a lot more about the refinery, down to a description of its pollution blanketing the town, material that only merits a hint in the final song.

Springsteen recorded “Born in the U.S.A.” on his four-track along with the rest of the Nebraskasongs, including it on the cassette he sent to his manager and co-producer, Jon Landau. The melody had yet to coalesce, and the echoey home recording blunts whatever impact the song might have had – Nebraska‘s low-fi fairy dust loses its magic here. The subtle electric guitar Springsteen overdubbed for the final forty seconds does begin to hint, just barely, at a signature riff, and the falsetto howls over the outro suggest a louder noise to come.

In April 1982, Springsteen and the E Street Band returned to Studio A at the Power Station, intending to wade through the Nebraska songs. Author Clinton Heylin, who obtained Sony studio records, finally confirmed in 2012 that the E Street Band attempted most or all of that album, although none of it has leaked – that, presumably, will have to wait for the inevitable boxed set. On the second day, Springsteen pulled out “Born in the U.S.A.” As Roy Bittan recalls, he played it on acoustic guitar and sang it for the band, rather than putting on the four-track demo.

By that point, the melody had evolved, and Bittan recalls pulling a six-note motif from the chorus Springsteen sang. “When I heard him sing it, I said, ‘That’s a riff,'” Bittan says. “A very succinct, simplistic riff.” He went over to his new Yamaha CS-80, a highly flexible analog synthesizer, and started shaping a sound. “I was always intensely listening to the lyrics to see what the hell the song was about,” Bittan says. “So I heard what he was talking about, and what I tried to conjure up is a Southeast Asian sort of synthesized, strange sound. And I played the riff on that.” By the second time Bittan played the riff, Max Weinberg was slamming his snare drum along with it.

From there, with Danny Federici playing piano for once and Steve Van Zandt on acoustic guitar, they started recording the song. “Bruce heard Max and me, and he said, ‘Wait, wait, wait. Stop. Okay. Roll the tape,'” Bittan says. “‘Does everybody have the chords?’ Yes, everybody had the chords. ‘Okay, roll the tape.’ Boom. There it was.”

Weinberg remembers a different set of events. In his memory, they first recorded a version of it as “a country trio,” with a country beat. Then, Weinberg recalls, Springsteen started strumming a rhythm that reminded the drummer of the Rolling Stones’ “Street Fighting Man” and he started playing along. “Everybody else came out,” Weinberg recalls, “and he said, ‘Just keep playing this riff over and over again.’ And he kinda arranged it.” (At the same time, Weinberg does not want to dispute Bittan’s memories: “Roy may have gotten that riff. You can call this chapter Rashomon!”)

However it started, the version on the album is an early live take (with a few minutes of jamming chopped out). In the years since Springsteen sat him down in the River sessions, Weinberg had rebuilt his chops from scratch, taking lessons from master session drummer Gary Chester. Everything he learned is on display in “Born in the U.S.A.” During the take heard on the album, Weinberg recalls, Springsteen “raises his hands and he kind of plays the air drums, like, ‘Do a solo.’ So, if you listen to that moment, Roy and Danny, they were playing the riff. Where they were positioned in the studio, they couldn’t see him stop. So you hear the riff go on . . . But then they felt the rhythm stop, so they stopped, and they do that whole thing. And then he counts off one, two, three, four and we go back into it.”

They finished around three in the morning. Six hours later, Springsteen drove by Weinberg’s house with a boom box and a cassette of Toby Scott’s rough mix of the song. The engineer had applied gated reverb (using a broken reverb plate) to Weinberg’s snare, which, combined with the overloaded room microphones in Studio A’s ceiling, made it sound like heavy artillery going off at the bottom of the Grand Canyon. (On the final mix, Bob Clearmountain somehow made it even more gigantic.)

“We sat on my deck having freshly squeezed orange juice, and we listened to ‘Born in the U.S.A.’ about twenty times,” says Weinberg. “I’ll never forget it, because I went from ‘I could have lost this job’ to the drums on that record. He told me, ‘The drums on this song are as important as the vocal. Because it sounds like confusion and bombs and you perfectly illustrated what I thought the song was about.'” Springsteen knew he and the band had just made one of their greatest recordings, even if the rest of the world wouldn’t hear it until two years later.

For the narrator of “Born in the U.S.A.,” his birthright has been stripped of everything he thought it should mean, just as life itself had been for the guy singing “Reason to Believe.” But if the furious blare of the music – so confusing to so many listeners – signifies anything, it’s that the singer is determined to find his own meaning, to hold his ground, maybe even to rediscover some remnant of what Springsteen would later call “the country we carry in our hearts.” “The big difference between ‘Born to Run’ and ‘Born in the U.S.A.,'” Springsteen told me in 2005, was that “‘Born in the U.S.A.’ was obviously about standing someplace.”

Bruce Springsteen: The Stories Behind the Songs, by Brian Hiatt, is in stores everywhere this week.