Springsteen made a surprise appearance at the Bruce Springsteen Archives event Saturday, April 27 at the Paramount Theatre, part of the Asbury Park Music and Film Festival. He and filmmaker Thom Zimny took questions from Christopher Phillips of Backstreets after a showing of rare footage of Springsteen and the E Street Band. 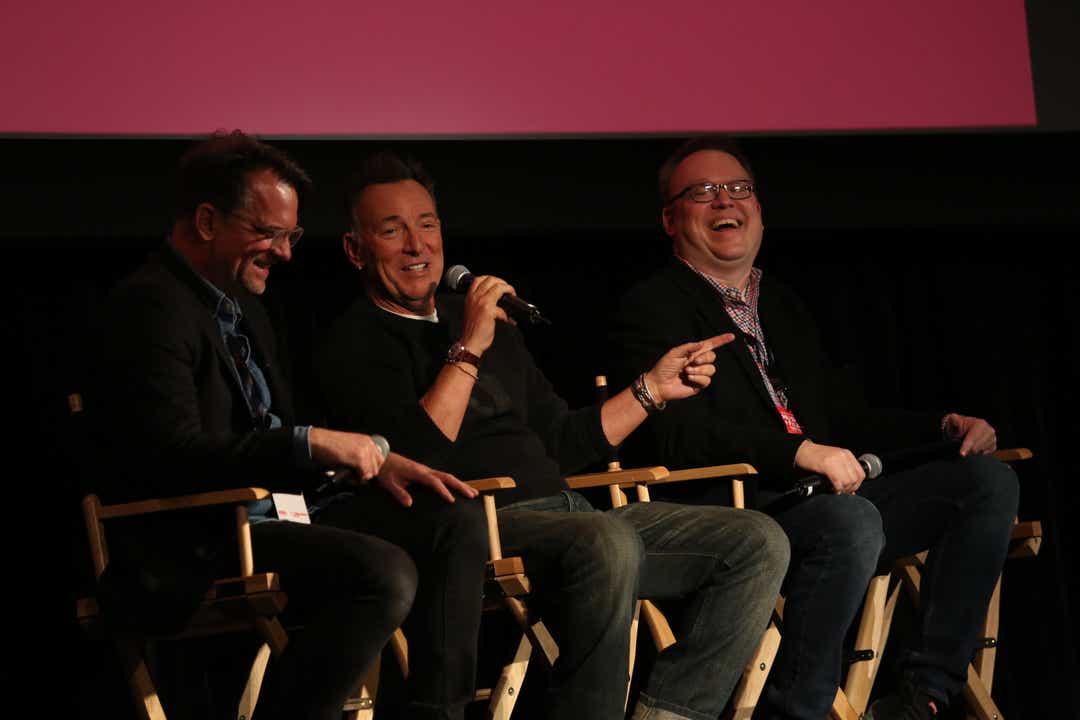 Thom Zimny (L-R), Bruce Springsteen and Chris Phillips on the stage of the Paramount Theatre in Asbury Park as part of the APMFF.
Chris Spiegel/Asbury Park Music & Film Festival

“Half of this stuff l’ve never seen before,” Springsteen said.

Early footage of the band is rare. The reason is partly due to Springsteen’s aversion to being filmed during the band’s early days.

“A magician should not look too closely at his magic trick ,” said Springsteen, who wore a sweatshirt with the number five on it .

The footage spanned 1974 -- when the line up included Vini Lopez and David Sancious -- to 2012, when Springsteen and the E Street Band kicked off the Wrecking Ball tour at the Apollo Theater in Harlem.

The Boss climbed up to the balcony during a performance of Wilson Pickett’s “634-5789” at the show.

“I don’t know what I was thinking,” Springsteen said.

Wife and bandmate Patti Scialfa was filmed looking up with a combination of horror and amazement. Did anyone know Springsteen was going to climb up there, Phillips asked

“I don’t think anyone knew because nobody was following me up there,” said Springsteen to laughter. “I was lucky they had some pipes up there so I could get down.”

A scintillating David Sancious piano intro was a highlight of a 1974 performance of “New York City Serenade” and a solo acoustic rendition of “The Promised Land” at the  St. Rose of Lima School in Freehold in 1996 presented a solo Boss.

Unlike “Springsteen on Broadway,” he didn’t tell too many stories from the St. Rose stage that night, he said.

“Just going back to St. Rose was dramatic enough,” said Springsteen, who attended the school.

He called his performance of “My City of Ruins” with the Seeger Sessions Band in 2006 at the New Orleans Jazz Fest one of his Top 5 concert experiences. It took place in the aftermath of Hurricane Katrina.

“(Rock 'n' roll) music is meant to push up against something,” said Springsteen.

In this case, the destruction of a hurricane.

Springsteen added that he wants to “get the Seeger Sessions Band back together.” Phillips noted that ‘My City of Ruins” was first performed in Convention Hall in Asbury Park  in the early aughts, when the current city revival was beginning.

“Now I get to  walk down the boardwalk like the Ghost of Christmas past but I like it,” Springsteen said. “I’m very happy for the city.”

The rare footage included his wife, Patti Scialfa, singing “Tell Him” with Cats on a Smooth Surface at the city’s Stone Pony in the ‘80s.

It was the night they met, Zimny said, a night referred to in the hit “Springsteen on Broadway.”

City guitarist Bobby Bandiera, who would go on to play with the Asbury Jukes and Bon Jovi and was once rumored to be Steven Van Zandt’s replacement in the E Street Band, is in the shot.

“I got to give a shout out to Bobby Bandiera,” Springsteen said. “An Asbury Park hero.”

The Boss was comically critical of the slowed tempo an early performance of “4th of July, Asbury Park (Sandy).”

“I went to the bathroom and I came back and I was still playing,” said Springsteen, who watched the program from the audience.

“I miss the Big Man,” said Springsteen, to loud cheers.

The program was presented by the Bruce Springsteen Archives and Center for American Music at Monmouth University. Springsteen just released a new song, "Hello Sunshine,' on Friday, April 26. It's from an upcoming album, "Western Stars."

Cell phones were put into Yondr pouches prior to the event, and were not accessible.  Springsteen previously made two appearances at the APMFF in 2017. The Archives followed a screening of “Clarence Clemons: Who Do You Think I Am” at the Paramount.