Bruce Springsteen on Broadway: What the Netflix version has that the stage doesn't REVIEW

The Netflix version of "Springsteen on Broadway" might be even better than the Broadway version.

The song “Long Time Coming” is performed and only rarely did attendees of the hit “Springsteen on Broadway” get to see it live. It was not played in the show except for the few times when play co-star Patti Scialfa wasn’t there.

It’s included in the filmed Netflix version of “Springsteen on Broadway,” which premieres 3:01 a.m. EST on Sunday, Dec. 16. If nothing else, its inclusion is worth seeing even if you’ve seen the play live.

“This is the final days of Patti’s first pregnancy. I receive a surprise visit from my father at my home in L.A.,” says Springsteen in the introduction of the song. “My dad, never a talkative man, blurted out, ‘You’ve been quite good to us’ and I nodded that I had, you know. He says ‘I wasn’t very good to you’ and the room just ... stood still.”

The Boss starts to tear up. He wipes his eyes. The exchange is taken directly from his memoir, “Born to Run,” and it’s one of the most moving in the book.

Frankly, it’s a surprise that it wasn’t included in every performance of “Springsteen on Broadway,” but here it is in the Thom Zimny-filmed Netflix version, and the story is better for it. It serves as the perfect denouement of the relationship between Bruce and his father, Douglas Springsteen, who passed away in 1998.

It closes the narrative started in “My Father’s House” earlier in the play.

“To my shock the unacknowledgeable was being acknowledged,” Springsteen says. “If I didn’t know better I would have sworn an apology of some sort was being made.

“Here in the last days before I was to become a father, my own father was visiting me to warn me of the mistakes he had made and to warn me not to make them with my own children.”

Douglas, at that moment, sought to free Bruce from the “chains of his own flawed behavior.”

“It was the greatest moment of my life with my dad and it was all that I needed,” Springsteen says.

“Springsteen on Broadway” didn’t need the “Long Time Coming,” or its introduction, but its inclusion makes a sublime work of art even better.

Zimny films the music play, which features Springsteen reciting passages out of his book and performing his songs on acoustic guitar and piano, largely unobtrusively. There are no attention-grabbing fast cuts, jarring angles or extreme close-ups. He pulls back, and lets the spray of Natasha Katz’s lighting set the mood. Desert yellows for “The Promised Land,” deep reds for “The Rising.”

“Springsteen on Broadway” is the story of working class kid from Freehold who grew up next to a church, loves his parents but has a difficult relationship with his father, loves rock ’n’ roll but has trouble making it because his Jersey Shore is the “(blanking) boondocks!”

He surmounts the challenges, and finds love and fulfillment with wife and bandmate Patti Scialfa. Zimny does wonderfully frame the Bruce and Patti songs, “Tougher Than the Rest” and “Brilliant Disguise,” finding at mid-range the artistic and heart-struck interplay between the two artists and lovers.

If you attended the play, you might notice that the audience for the Netflix shoot, which was an invited crowd, to be a bit quieter, a bit more subdued than the normal crowds at the Walter Kerr Theatre. Applause for the E Street Band members names that Springsteen mentions seems a bit less spontaneous. 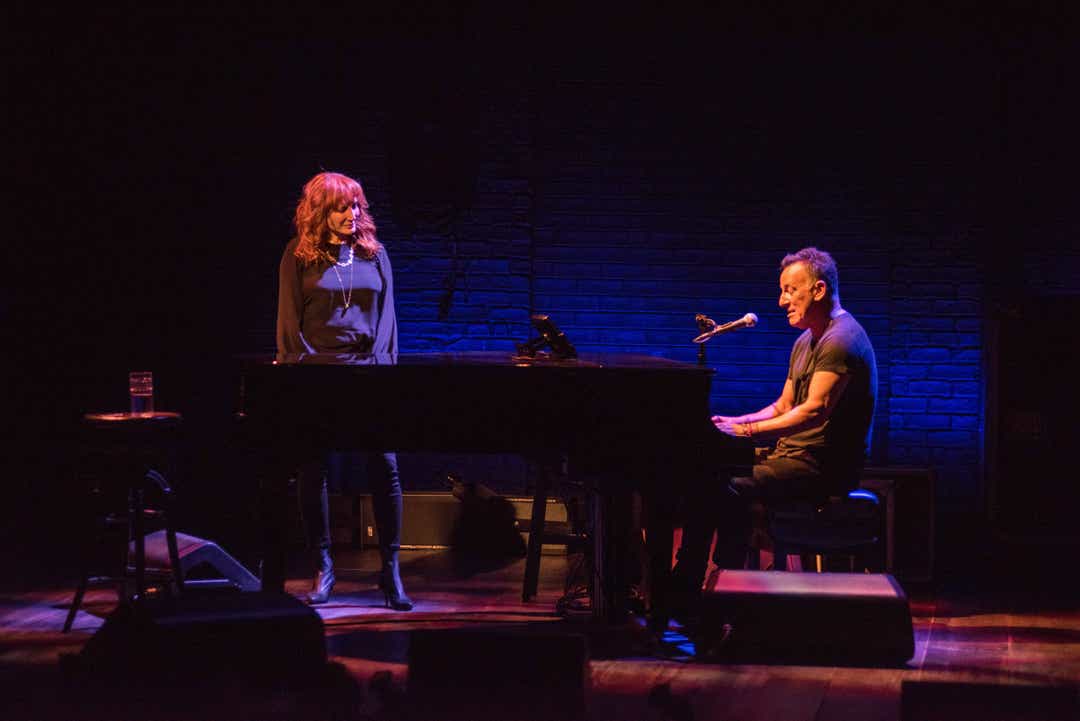 The Netflix version was shot over two performances in July. As such, “The Ghost of Tom Joad,” which replaced “Long Walk Home” on June 19, is included. The filmed version clocks in at about two and half hours, longer than the two-hour length of the play when it debuted on Oct. 3, 2017. Lines were massaged and jokes coaxed a bit over the months, which extended the running time.

Oh, it’s very funny. The Boss can tell a joke.

Take the audition for a music bigwig at the Student Prince in Asbury Park in the early ’70s.

“I got off the bandstand, the guy walking up to me and looked me in the eye, shook my hand and said, 'You guys are the best unsigned band I’ve ever seen,'” deadpanned the Boss. “Then he slept with my girlfriend and left town.”

“Springsteen on Broadway” is leaving town. The last performance is Saturday, Dec. 15. A soundtrack will be available from Columbia Records on Friday, Dec. 14. In 2019, Springsteen will be working on “various recording projects” but there will not be a tour with the E Street Band in the new year, according to a statement he released on Dec. 4.

“Springsteen on Broadway” was an extraordinary experience. It now lives forever.